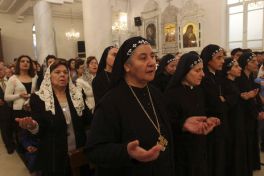 Reuters – In a walled churchyard in the old city of Damascus, a small group of Syrians debate whether the time has come to flee one of Christianity’s ancient heartlands.

Members of a Christian community which stretches back 2,000 years, they worry that Syria’s civil war can have no happy outcome and they face an upheaval that fellow believers have already suffered elsewhere in the Middle East.

“The future is full of fear,” said one man who gave only his first name, Rami. “We hope our fate will not be that of the Christians of Iraq, but nothing is guaranteed. Now we meet in church rather than cafes because we’re afraid of being bombed.”

Rami’s friends were gathered at the Evangelical Church in the ancient Bab Touma quarter of Damascus the city where Saint Paul began his mission to spread Christianity a few days before Pope Benedict is due to visit neighbouring Lebanon.