Christians in Iraq Celebrate After Church Liberated From ISIS

Source: Newsmax
Jason Devaney | 25 October 2016
Christians from an Iraqi town are celebrating after military forces took it back from the Islamic State (ISIS) following two years of living under the terrorist regime. 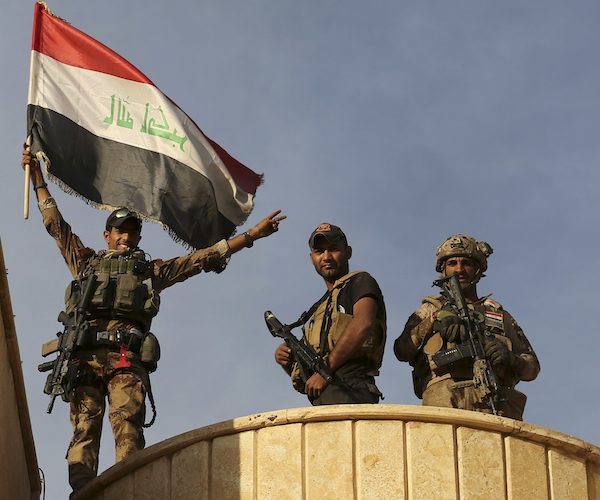 Bartella sits 21 kilometers east of Mosul, a larger city that has been under ISIS control since 2014. A military operation to reclaim Mosul is under way. Bartella is on one of several main roads leading to Mosul.

According to the Financial Times, Iraqis in the Christian Nineveh Plains Forces fought alongside special forces troops from the Iraqi military and helped recapture Bartella. In recent days, they rehung a Christian cross in the Syriac Orthodox Church of St. Matthew, rang the bells, and prayed.

Those fighters, the Times reported, will stay and keep the area safe now that ISIS has fled.

“We’re feeling something you can’t describe — that’s how happy we are,” Christian fighter Hussam Matteh told the Times. “We are now back home in the land of our ancestors, our churches and our heritage.

“I want to tell my people: Don’t go. Stay. There is no reason to flee Iraq and go abroad. This our land, we have it back — and from now on, we will be the ones who defend it.”

Sky News reported the church in Bartella was partially damaged by fire and the interior was ransacked by ISIS militants. Graves in a nearby cemetery were opened and valuables in them were taken.