Source: NorthJersey.com
“Christians across the world have been persecuted because of their faith, and the world should not remain silent and indifferent to what is happening. We are not in 1914, 1915, 1916.”
Hannan Adely | 27 September 2014 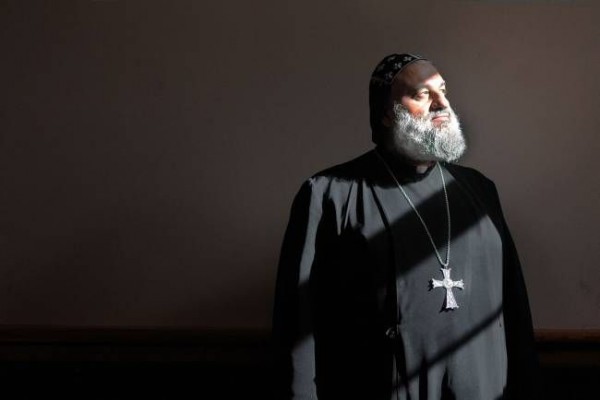 The patriarch of the Syriac Orthodox Church, a cleric who formerly lived in Teaneck, recalled his visit recently to the Kurdish region of northern Iraq, where thousands of Christians have fled for their lives. A young boy in a crowded church threw up his arms and said to the patriarch: “We have no place. We have no space.”

He meant a real, physical place for Christians like him and his family, who were expelled from ancient Christian towns in Syria and Iraq. But Patriarch Mor Ignatius Aphrem II said he also understood his words to mean a place in the culture, religion and life of the Middle East.

“Their existence is threatened,” Aphrem said during an interview last week at St. Mark’s Cathedral in Teaneck, where he served for 18 years until his election as Antiochan patriarch last spring. “This has been their home for 2,000 years, and thousands of years before that they were indigenous to the area. There’s a real threat that they’ll be driven out of the Middle East and there won’t be Christians anymore in the area where Christ was born.”

About 13 million Christians remain in the Middle East, and make up about 4 percent of the region’s population, according to a 2010 Pew Forum report. That population could continue to decline amid rising religious tension and war in the region. Samer Khalaf, a Paramus resident who worships at St. Mark’s, said the people should be concerned because the loss of Christians would hurt the entire region.

Aphrem and other Middle Eastern Christian leaders joined the In Defense of Christians summit in Washington, D.C., this month and met with top officials, including President Obama, to call for international help to protect Christians and save their communities from extinction.

The message resonates with Arab-Americans — about two-thirds of whom are Christian — who worry that their religion is being wiped from swaths of the Middle East. They are calling for understanding and protection to ensure safety for their families still in the region and a place for the world’s oldest Christian communities.

For Middle Eastern Christians, roots are a deep source of pride. Their ancestors were among the first Christians who built the early church, and Sunday services are steeped in ancient Christian ritual and ceremony. Some, including members of St. Mark’s in Teaneck still worship in the Aramaic language that Jesus spoke.

“The bottom line is this is where God chose to reveal his word,” Khalaf said. “It was to us. For us to leave that foothold in the Holy Land, I think it diminishes the entire Christian community. Period.”

Arab Christians first came in large numbers to the United States in the late 1800s, mostly from what is now Syria and Lebanon, and many settled in Paterson. They include Christians who are Maronite, Coptic, Melkite, Roman Catholic and Eastern Orthodox. Many more left the Middle East in recent decades because of warfare, economic problems, territorial strife in Israel and rising religious tensions.

The plight of Christians was thrust into headlines in recent months after they were attacked this summer in their towns and villages in Syria and Iraq. Fighters from the radical group Islamic State destroyed churches, monasteries and religious statues and demanded that people convert, pay a tax or die. They terrorized Christians, Shiite Muslims and other religious minorities with executions and beheadings.

People had hours to flee, and most left with only the clothes on their backs. When Aphrem visited the refugees in northern Iraq, he found them sleeping in streets and abandoned buildings. On Sept. 14, he told a standing-room crowd at the Assyrian Orthodox Church of the Virgin Mary in Paramus about his appeal to Obama for protection and help so Christians could return home and be safe.

“Christians across the world have been persecuted because of their faith, and the world should not remain silent and indifferent to what is happening. We are not in 1914, 1915, 1916,” he said, referring to the Ottoman slaughter of some 1.5 million Armenian Christians. “Today, with technology and communication, nobody can say I cannot see or hear what happened to these people.”

Metropolitan Joseph Zahlawi of the Antiochian Orthodox Archdiocese of North America, based in Englewood, also was at the 45-minute meeting with Obama and U.S. national security adviser Susan Rice, where he asked for world dialogue about protecting Christians.

In a radio interview from the In Defense of Christians summit, Zahlawi said Christians in Syria were all affected by the violence from Islamic State fighters and the 3-year-old civil war. He said that four of his cousins had been killed and another young relative was burned from the waist down when a bomb struck on his way to school.

“We cannot accept the Middle East to be without Christians,” he said. “That would be an unforgivable crime. Therefore we are trying before it’s too late to do something and to encourage the Christians to stay where they are.”

In churches across New Jersey, prayers have been offered for the faithful in the Middle East. Youth groups and church committees raise money for the refugees and consider ways to raise awareness of their plight.

Arab Christians, and many people who are neither Arab nor Christian, have adopted the Arabic letter N as their online profile picture as a show of support. It stands for Nazarene, an Arabic word used to describe Christians because they follow Jesus of Nazareth. The letter was painted on the doors of Christians who were targeted by Islamic State fighters in Mosul, Iraq.

Nuran Tasci, who grew up in a Turkish town near the Syrian border, said relations among religious groups had been good until recently in Syria. Fanaticism had escalated, he said, and he worried for the safety of his relatives there.

“If we are really the leader of the world focusing on human rights, we can focus on that area and see our Christian brothers and sisters and what they are suffering,” said Tasci, of Saddle River.

The dwindling of the Christian population goes back decades before the recent attacks in Syria and Iraq. Christians have fled for a variety of reasons, including civil war in Lebanon; violence that followed the 2003 U.S. invasion of Iraq; persecution of Coptic Christians in Egypt; and displacement from towns and villages after the establishment of Israel. Some have simply followed the trail established by relatives who came to the United States before them in search of economic opportunity.

“You lose a whole set of culture and perspective that you would not have without the Christian community,” Tasci said.