Christians Murdered By ISIS on Way to Monastery Were Asked ‘to Leave the Cross’; Everyone Who Said ‘No’ Was Shot Dead 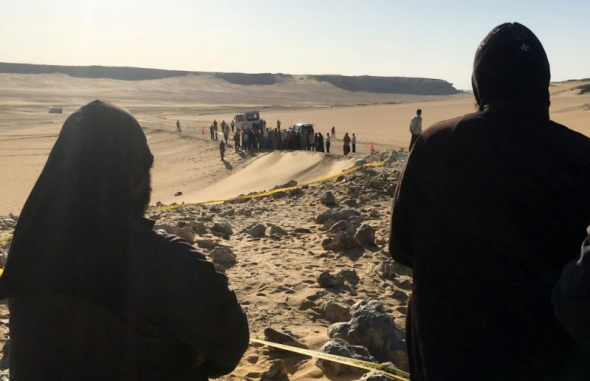 The Christian faith triumphed even after the militants working for the Islamic State (ISIS) murdered 29 Christians in Egypt last Friday morning. Christian leaders expressed this view after reports came out that the victims professed their love for God before they were slaughtered.

The ISIS militants stopped a bus carrying Coptic Christians who were on their way to a remote desert monastery that day, the Chicago Tribune reported.

This was the fourth major attack against Christians in Egypt since December, bringing the death toll to over a hundred.

Bishop Makarios, the top Coptic Orthodox cleric in Minya province, said the Christians who were killed bravely stood up to their oppressors. They were told that their lives would be spared if they converted to Islam, but they refused to renounce God.

“They chose death,” said Makarios. “We take pride to die while holding on to our faith.”

One of those who were murdered for their faith was a resident of Tinley Park, Illiinois named Moshen Morkous, 60, who was travelling with family members headed to the monastery of St. Samuel the Confessor.

Seven of his relatives, including two sons who live in Egypt, were also killed.

His nephew, Gerges Morkous, revealed on Sunday at the St. George Coptic Orthodox Church in Monee that his uncle was on his way to the monastery to see his grandchildren when he was killed by ISIS gunmen.

“They had no mercy. They shot the men, children, women, everybody,” he said. “They asked the people still alive inside to leave the (Christian) cross,” Morkous said. “Everyone who said ‘no,’ they shot. We believe they’re in heaven, right now.”

His uncle’s wife managed to survive and was rushed to an Egyptian hospital. She is doing fine, but is still reeling from the attack. “She doesn’t believe what happened,” Morkous said of his aunt.

The bravery of the martyrs is being lauded by Egyptian-American preacher Michael Youssef, Charisma News reported. He said during the World Summit for the Defense of Persecuted Christians held earlier this May that the Coptic Christians’ refusal to bow down to the Islamic faith is sending a message to terrorists that “we’re not afraid of you.”

“This is the one thing I think so many Christians in America don’t understand: That persecution strengthens and makes believers more passionate about their faith than easy Christianity,” he said.