Christians returning to Homs, Syria, even though Islamic State looms

Source: Catholic News Agency
Father Andrzej Halemba | 01 April 2015
Homs, Syria, Apr 1, 2015 / 02:01 am (Aid to the Church in Need).- In the wake of the Syrian regime’s taking full control of the ancient Christian city of Homs almost a year ago, a measure of normality has returned for local residents – including a remnant of the Christian population. 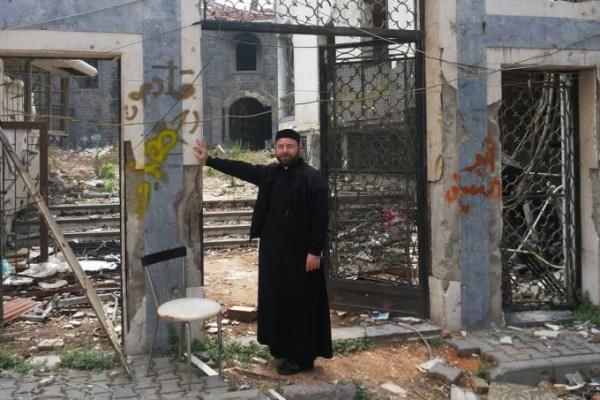 The long-time home of Sunnis, Alawites, and Christians living in relative harmony, the city suffered some of the worst fighting of Syria’s now five year-old civil war that has left the major industrial center in ruins.

The Christians of Homs – where the Syrian uprising got its major start in 2011 – have spent recent months with a small measure of cautious hope for a more stable future. That delicate trend is being challenged as ISIS has begun making its way into Homs Province in an apparent move to expand its territory by grabbing land controlled by the Syrian regime.

When Christians returned to the city last year, one of their priorities was to honor Dutch Jesuit Father Frans van der Lugt, who was murdered by a masked gunman in April 2014. The priest had stayed behind to care for Christians as well as Muslims trapped in the Old City by heavy fighting between the regime and the opposition.

Eleven churches in the Old City of Homs were badly damaged or destroyed during nearly three years of fighting. Most no longer have windows; copulas were perforated by shells; pews were burned or ripped out; and many icons were disfigured.

According to Jesuit Father Ziad Hilal, the situation in Homs has improved, even though violence erupts periodically and many people continue to live in fear. Earlier this year, a car bomb in the city center killed more than a dozen people, most of them students. In some parts of the city, rebels continue to challenge government troops.

Fewer than half of city’s hospitals are functioning, and inflation has boosted the cost of living beyond many people’s reach. What’s more, criminal gangs have taken to kidnapping for ransom, even targeting the poor. A number of Catholics are still missing.

However, despite the dangers, people have returned to their homes and started rebuilding houses, shops and churches; some offices have resumed functioning and a university has reopened its doors.

Father Hilal reported that late last year 1,700 Christians returned to their only partially-damaged homes, many of them having to rely on the provision of warm meals and other humanitarian supplies. Fuel and electricity are still in short supply.

It is estimated that some 40,000 Christians belonging to various Churches live in Homs today. One of their main centers of support is the Church of Our Saviour, where all are welcome. More than 5,000 parishioners take part in the Sunday celebrations, and some 600 children participate in religious instructions every week.

The biggest visceral loss for local Christians remains the death of Father van der Lugt, whom many consider to have been a holy man.

His courage in staying and supporting the remaining Christians in Homs during the city’s siege is an example to all those longing for peace in Syria. His tomb in the Jesuit headquarters of Homs is destined to become a shrine and place of pilgrimage.

Father Halemba, who recently returned from a fact-finding mission in Syria, is in charge of the Middle East desk for Aid to the Church in Need.