Christians across the United States on Wednesday reacted with a mix of skepticism and derision over the release of a 4th century papyrus suggesting the possibility that Jesus was married.

The papyrus fragment, announced Tuesday by Harvard University Divinity School professor Karen King, features Coptic text in which Jesus refers to “my wife.” Christian doctrine across the globe maintains that Jesus never married, a lifelong bachelorhood that the Catholic Church cites as a basis for the celibacy of its priests. 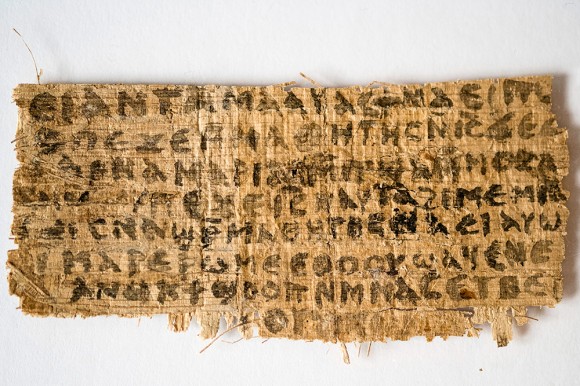 Some faithful greeted the announcement with cautious reflection, while others attacked the authenticity of the text, which King said was provided to her by its owner, who asked to remain anonymous.

Bob Coy, founder of the Calvary Chapel of Fort Lauderdale, Florida-one of the largest evangelical churches in the United States-said the document was likely either a forgery or a “misprint.”

Coy described his congregation, 20,000 worshipers at seven locations nationwide each weekend, as “very astute” individuals who might like to have fun with the news but whose beliefs would not be impacted by it.

The text “doesn’t have any provenance,” Jim West, a Baptist pastor in Petros, Tennessee, said in an interview Wednesday.

“Out of thin air there is this fragment that shows up with a line of text, and we don’t know where it came from, the larger context, when it was written,” he said.

The Gospels in the New Testament are silent on the issue of Jesus’ marital status, while early Christian texts from the 2nd and 3rd centuries say he wasn’t married, said West, an adjunct professor of biblical studies at the Quartz Hill School of Theology in Quartz Hill, California.

Some early Christian groups stated that Jesus was married, but the major strains of Christianity have rejected those claims, West added.

The news “demonstrates that a scholarly discussion has been begun,” said Terrence C. Donilon, spokesman for the Catholic Archdiocese of Boston.

“Maybe someday that will have a conclusion,” Donilon said. “In the meantime, we are content to follow the millennial teaching of the church.”

King, who made the announcement at a conference of Coptic experts in Rome, noted that the text does not constitute proof that Jesus had a wife, but indicates a debate during Christianity’s formative years about Jesus’ marital status and the role of women in the church.

The Rev. James Martin, a popular Jesuit writer, told The Washington Post on Monday that even if evidence of Jesus’ marriage were to emerge, it would do “very little” to impact his views of the priesthood.

“For me, chastity is still the way that I’ve chosen to love many people freely and deeply,” Martin told the Post. “Plus I’ve made a vow to God to be chaste. It might make me think of Jesus’ life in a different light (that is, even more challenging, if it were found he had to balance the demands of marriage with his public ministry), but it wouldn’t change the fact that I believe in his life, death, and most importantly, resurrection.”

Tony Cartledge, a contributing editor at the journal Baptists Today, said that while “speculation about whether Jesus ever loved a woman as a wife may be provocative,” it is also “fruitless.”

“Better to recall that Jesus loved all people enough to give his life for our benefit, and called us to love others in the same unselfish way-whether married, or not,” Cartledge, a professor at Campbell University Divinity School in North Carolina, wrote in a blog post.

The announcement sparked buoyant social media discussions Wednesday, including humorous banter under the hashtag #jesuswife on Twitter, where users mused what the Christian messiah may have heard from his spouse.

“So you’re the Son of God but you can’t even remember our anniversary?” user Gerald Gee Smith wrote.