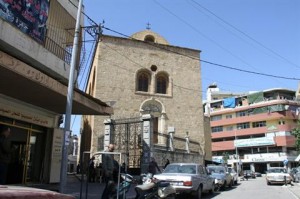 A view of Tripoli’s “Churches Street.”

Recent clashes and bouts of violence have flared in Tripoli, fostering negative perceptions of the country’s second largest city, once a paragon of coexistence.

Previous episodes of fighting, dating back to the Civil War period, have pushed the majority of Christians out of the city while many of those who remain are adamant about “maintaining their roots.”

There is no official count of Christians residing in Tripoli, but according to the Greek Orthodox Archdiocese of Tripoli-Koura, the population has declined from 22 percent in the 1970s to 6 percent today.

“This is where we grew up and this is where we fit in. Why would we leave?” Nawfal Nawfal, a historian and university professor who lives in the Zahrieh neighborhood, told The Daily Star.

Sipping black tea in a coffee shop, the 68-year-old said that his academic credentials could easily have led to a position outside Tripoli, but that he is too tied to his hometown:

“I even renovated the family house in Zahrieh and refused to move to a new building in the modern part of the city. There is no stepping away for me. I am holding on to my roots. … Roots are very important, they tell you that you belong somewhere.”

“My daughter got married and went to live in Canada but my other two children are here. She said that obtaining a foreign nationality for her kids would help them in the future. She didn’t leave for herself, she did it for the kids,” Nawfal added.

According to the professor, it was not interreligious tension that prompted the Christians to leave Lebanon’s “northern capital,” but rather the harsh economic conditions that have burdened Tripoli’s inhabitants, irrespective of their sect.

“They never left because of a Christian-Muslim conflict; they left because the city lacks development and employment. Perhaps they had better chances outside [the city] due to family connections and that is why they departed,” he explained.

The migration of Christians to other parts of the north, mainly Koura, Zghorta and even Batroun, began with the outbreak of the Civil War and reached its peak with the emergence of the Tawhid Movement in 1982, a Sunni fundamentalist group created by Sheikh Said Shaaban, allied with the Palestine Liberation Organization under Yasser Arafat.

The Maronites, who were located mostly in the neighborhood of Qibbeh, headed toward the qada of Zghorta via the village of Majdlaya just a few kilometers away from their original residences in Tripoli. The Greek Orthodox, meanwhile, headed toward the Koura region, where the sect is prevalent, and started settling there.

“Some left on temporary basis, to wait for things to get better and settle in Tripoli,” said Talal Jabbour, a high-school teacher from Tripoli.

“As the crisis became prolonged, they sold their houses and remained outside the city,” he added.

Jabbour said that the majority of Christians who left the city, or at least the young people of the 1950s and 1960s, left with memories of a northern capital that bears little resemblance to today’s Tripoli:

“It was different, a vibrant city full of life. … The city certainly had a unique civilization. The old generation is aware of a different image of Tripoli. They know that it isn’t a place for radicalism and fundamentalists.”

Although they constitute a minority in the city, two parliamentary seats for Tripoli are reserved for Christian legislators – one for the Maronites and another for the Greek Orthodox.

Once a Crusader state and a stronghold of Christian forces in the 12th century, Tripoli fell to the Muslims in the late 13th century and was taken over by the Mamluks in Cairo.

However, the city was renowned for its diversity. There were Jews in the city in the early 19th century, and it only recently became home to a distinct Islamist presence.

Father Samir Yakoumi said that Christians in the city practice their religion and attend Sunday Mass on a regular basis.

“We have many churches across Tripoli and [the adjacent city of] Mina, and they all hold Sunday Mass and regular prayers. Christians here lead a normal life,” he said.

Often asked by his Beirut friends about the situation in Tripoli, Yakoumi said he didn’t feel threatened or at risk.

“I tell them the city is not the Kandahar they think it is,” he said, referring to the comparison made by some to the war-ravaged city in Afghanistan.

“Those who live inside Tripoli don’t fear extremists, but it’s different for those outside the city. … They tend to exaggerate the threat imposed by Islamists,” he said.

Yasmine Andari, a 25-year-old resident, recalled an incident when she accompanied one of her friends from the Koura village of Kfar Hazir to the city.

“We were heading from Koura to Tripoli to do some shopping, and all the way there, it was impossible for me to put up with her. She was grumpy and whining about the possibility of seeing Salafists in the city, and she wanted me to stop midway and go back to Kfar Hazir,” Andari said.

“I almost lost my temper and told her to stop all this drama. I live here and I was never attacked by any extremist or Salafi. I believe that when it comes to Islamists in Tripoli, some people really lay it on thick.”

Andari said that she grew up in the Tal area, located in the heart of the city, and she never felt bullied because of her sect.

“We live in the Tal area, we have neighbors that feel more concern for us than our relatives do,” she explained.

However, the owner of Tripoli Plaza, a shopping center in the city, said that recent clashes between gunmen from the rival neighborhoods of Bab al-Tabbaneh and Jabal Mohsen had affected business.

“Tripoli was the capital of the north. … Residents of Akkar, Koura and Zghorta and even Batroun used to get all their stuff from here, including furniture, clothing and even vegetables,” said Salah Halabi.

“Obviously, their numbers have dropped recently, and many businesses have suffered. Neighboring areas and villages such as Kousba and Majdlaya have started establishing their own centers and have reached a level of self-sufficiency for the needs in their areas,” he added.

“And in some way, they’re right. Why would they still come here if the city is always on edge? Security incidents can break out at any time and that is keeping people away.”

The frequent clashes in the north have definitely succeeded in driving some Christians out of the city.

In 2007, following several months of battles between Fatah al-Islam, an Islamist militant organization, and the Army in the Palestinian refugee camp of Nahr al-Bared near Tripoli, Melissa Rahban and her family decided to move to Koura.

“We moved to Dahr al-Ain and rented a small apartment there. It was supposed to be for an interim period but I was able to get a job in one of the schools here and enrolled the kids,” she said.

“I still go there, of course. I have many relatives in Mina but I don’t think about moving back to Tripoli, It may not be Kandahar, but it certainly isn’t a place to call home anymore.”