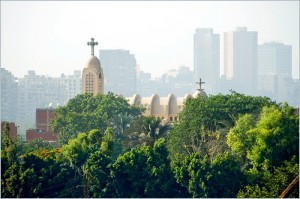 Wasfi Amin Wassef used to buy and sell jewelry from his shop in Cairo’s vast Khan al-Khalili bazaar. Now he mostly buys it.

Well into a third year of economic malaise following the overthrow of President Hosni Mubarak, many ordinary Egyptians are selling their most cherished possessions, including heirloom jewelry, to raise cash for a ticket that will let them start a new life abroad. Official figures or estimates are not publicly available, but anecdotal evidence suggests emigration is rising.

“The number of people who sell us their gold since the revolution has increased three times,” Mr. Wassef said during an interview this month.

Some are Muslims but most are Christians, said Mr. Wassef, a member of Egypt’s ancient Coptic Orthodox Christian minority.

Since the ouster of Mr. Mubarak in February 2011, a growing number of Copts, including some of the most successful businessmen, have left Egypt or are preparing to do so, fearing persecution by an Islamist-controlled government as much as the stagnant economy that is smothering their industries.

Among the most prominent, the heads of the Sawiris family for several months recently ran their business empire from abroad, although senior members of the family returned to Egypt on May 3.

“Every week I learn of 10 people who are leaving or who have already left,” Mr. Wassef said. “They know that what happened to the Sawiris’ can happen to them tomorrow.”

Coptic Christians, who account for no more than 10 percent of Egypt’s 85 million people, predate the Muslim conquest by six centuries and represent the last tile in a former mosaic of Egyptian religions, sects and ethnicities.

Economically, Coptic business leaders have punched above their weight, dominating agriculture in the preindustrial age and in modern-era trade, finance and accounting. They have blended well into Egypt’s millennia-long tapestry of demographic change, which helps explain their resiliency. As Munir Fakhry Abdelnour, a prominent Copt who has worked in business, finance and politics, put it: “There is no Coptic quarter in Egypt.”

Like other Arab leaders, Mr. Mubarak made a point of protecting minority groups to nurture loyal constituencies and patronage systems that he could leverage against his Islamist rivals. Though secular tension sometimes turned violent during his 30 years in power, it was generally contained by the state security apparatus.

Since Mr. Mubarak’s overthrow, however,  attacks on Copts and their institutions have been widely reported. In October 2011, for example, following the burning of a Coptic church in Upper Egypt, security forces clashed with Christian protesters: 28 people, mostly Copts, were killed. Last month, Muslim extremists laid siege to Egypt’s main Coptic Cathedral in Khusus, a small town north of Cairo. The assault, which according to witnesses and video footage the police did little to prevent, followed a funeral for five men who died days earlier in clashes with militants.

Critics blame President Mohamed Morsi and his government for failing to quell the violence. In an editorial last month, the state-owned Al-Ahram Weekly called the killings at Khosous “a symptom of irresponsibility in high places, of indifference that can lead the state to the verge of collapse,” while the Copts’ spiritual leader, Pope Tawadros II, accused Mr. Morsi of “delinquency” and “misjudgments.”

Mr. Morsi, a longstanding member of the Muslim Brotherhood who resigned from the group before taking office, issued a statement of regret following the attacks that struck many observers as perfunctory. Last week, he pointedly sent a low-level functionary as his representative to the Easter Mass led by the pope.

Mingled with the threat of physical violence is the fear among Coptic business leaders that they are being singled out for punitive enforcement of the tax code.

Orascom Construction Industries, the flagship in the Sawiris family business group and the largest publicly traded Egyptian company, is alleged by the finance minister to have failed to pay taxes on profit realized from its 2007 sale of a cement unit to the French cement maker Lafarge. The charge confounded analysts; Egypt has no capital gains tax, they point out, and O.C.I. took the cement company public two months before its sale precisely to benefit from tax incentives aimed at encouraging companies to list their shares.

Still, in April, O.C.I. announced that it would pay 7 billion Egyptian pounds, or $1 billion, to Cairo’s tax authority and prosecutors promptly lifted a travel ban on the company’s chairman, Nassef Sawiris, and his father, Onsi. O.C.I., meanwhile, is pursuing plans announced in January for a share swap with its Dutch unit, OCI NV, which would effectively shift trading in the company’s stock to Amsterdam.

The telecommunications tycoon Naguib Sawiris, the eldest and most outspoken of the Sawiris brothers, has all but liquidated his assets in Egypt. In October 2010, he signed a $6.5 billion deal that merged Orascom Telecom into the Amsterdam-based telecommunications company VimpelCom, which was controlled by the Russian investment firm Alfa Group. Hany Genena, the head of research at Pharos Capital, an Egyptian investment bank, said Mr. Sawiris was now selling most of his holdings in Orascom Telecom Media and Technology Holding, which was created as part of the merger with VimpelCom.

Cash rich, analysts say, he is in the United States seeking investment opportunities in the country’s emerging shale gas industry. Mr. Sawiris declined requests for an interview for this article.

To be sure, Coptic business leaders are not the only ones seemingly targeted by what they see as the selective interpretation of tax laws. Investors and businessmen regardless of faith complain of drift and inconsistency at the policy-planning level. Companies that were privatized during the twilight of the Mubarak years are now being considered for renationalization. A new tax law published in December has since been withdrawn. Plans to curb costly and wasteful subsidy systems have been postponed or watered down.

“Everything is being done on a whim,” Mr. Genena said. “We wonder how we can keep operating like this.”

But the burden of uncertainty rests heaviest on Coptic business leaders and investors who by numerous accounts are voting with their feet.

Rafik Beshay, the procurement director at a Coptic-owned steel mill, says he is having difficulty finding Christians to fill job openings created by the departures as he tries to maintain parity among Christian and Muslim employees. The Caucasus state of Georgia is offering citizenship papers to any Egyptian Copt prepared to directly invest $20,000 there, according to Mr. Wassef, the jeweler, while the U.S. government has made it easier for Copts fleeing religious persecution to settle in America, according to Rasha Samir, the head of publications at the investment bank EFG-Hermes in Cairo.

Requests for U.S. visas, she said, which ordinarily take months to process, are now finalized in just two weeks.

Steve Blando, a spokesman for the U.S. Department of Homeland Security which handles asylum requests, denied that there was a policy to fast-track the process for Egyptian Copts.

“The U.S. asylum system does not make decisions to grant asylum to individuals of a particular nationality,” Mr. Blando said. Each claim “is adjudicated on a case-by-case basis, and the applicant must meet each element of the asylum standard in order to establish eligibility for asylum.”

At 1,867, last year’s figure was nearly six times what it was in the year before Mr. Mubarak was overthrown.

Most viewed articles
Last Man Standing175
Metropolitan Hilarion Speaks on Whether It Is Possible for ROC to Reunite with Old-Believers134
Saint Macrina the Younger as a Model for our Lives112
Christ Forgives and Heals98
Metropolitan Onuphry: People Get Strength for Life and Salvation in the Church54
Turning Trials Into Hope52
Businessman Buys a 19th Century Church and Returns It to the Faithful48
The Temple of Woke: Are Universities Basically New ‘Religious’ Training Centers?1
Most popular authors
Pravmir.com team237
Archpriest Geoffrey Korz175
Protopresbyter Fr. George Papavarnavas112
Fr. Theodore Stylianopoulos98
Fr. James Guirguis52
Eric Hyde1