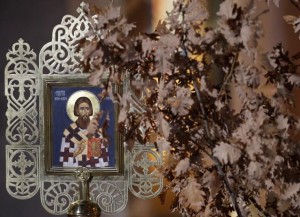 BELGRADE — Serb Orthodox Christians in the country and abroad are this Monday marking Christmas, the holiday of the birth of Jesus Christ.

In Belgrade, SPC Patriarch Irinej served Christmas liturgy at St. Sava’s Templ, in the presence of a large number of worshippers, Prime Minister Ivica Dačić and other high-ranking state officials.

Beside Parliament Speaker Nebojša Stefanović, Army chief Lt. Gen. Ljubiša Diković and Crown Prince Aleksandar Karađrević, among others, the religious ceremony was attended by dignitaries of other churches, including Roman Catholic Archbishop of Belgrade Stanislav Hočevar.

Afterwards, the patriarch’s Christmas message was read, in which he stated that Serbia needed love, peace, and good will, and called on the nation not to forget its Orthodox faith, language, its holy places – the graves of its ancestors, its roots in St. Sava’s heritage.

“Christmas is a day of consolation and hope for all people driven away from their homes and refugees, including all those of our kin who are eating the bitter refugee bread,” the patriarch said.

To the citizens in Kosovo and Metohija, Irinej’s message was that Christmas is the day when Easter also begins, that resurrection never happens without sacrifice, and that on the 100th anniversary of the liberation of Kosovo, “the faith must be put in the Lord”.

Previously, on Christmas Eve, the patriarch lit the oak log – badnjak of the Serb Christmas rituals – in front of Belgrade’s Church of St. Aleksandar Nevski.

Christmas is one of the two major Christian holidays, marking the birth in Bethlehem of Jesus Christ, which, to the believers, means the presence of his spirit among people, bringing them peace and forgiveness.

In Serbia, the holiday is preceded with a 40-day lent which ends in a Christmas day meal that brings families together.

On the day, Serbs traditionally greet each other with the words “Christ is born”, and reply with, “Indeed he is born”.