Christmas being one of the most important family feast days in the Christian world, through ages has many traditions in different parts of the world. I am going to touch upon some of these traditions and bring it to you.
Very Rev. Alexander Kile, Archimandrite | 24 December 2008

Christmas being one of the most important family feast days in the Christian world, through ages has many traditions in different parts of the world.  These traditions include, decorating, gifts, cooking and ceremonies. 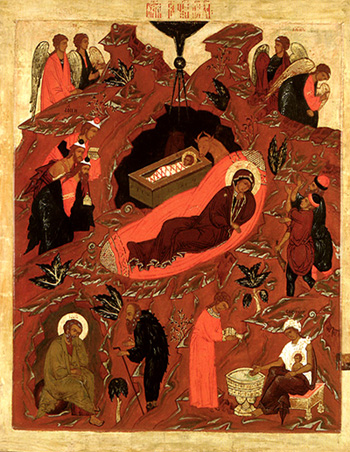 THE NATIVITY SCENE first appeared in the 4th century in Spain. Christian religious books were forbidden to be read, I mean manuscripts and the Bishop of Cordoba did the First Nativity Scene for his people to understand how and where their Savior was born. After Christianity was recognized as official religion, the Nativity Scenes developed in the West. Spain, Italy, Germany, France, Austria had competitions who is going to do the best Nativity Scene.

The Roman Catholic Church puts up a Nativity Scene in their churches and at the mid night service the priest with a procession brings at mid night the babe doll and places it in the manger, in the Nativity place and all the bells ring announcing the Birth of Christ. From this tradition many homes have the nativity scene located or under the Christmas tree or in a central place in their living room.

In the East because the VIIth Ecumenical Synod forbids statues, we have the NATIVITY Icon. A cave, Virgin Mary lying down, the animals in the cave and a babe wrapped in linen, whose face looks to an older baby not to a newly born person, because it pre-existed from the beginning of times. On the top of the cave is the star on the left are the shepherds with the angels and on the right which is the East the three Kings following the star or presenting their gifts.

The Christmas tree comes to us from the Gospel from the family tree of Jesus Christ, which is read the Sunday before Christmas in the Orthodox Churches.  During Byzantine times as the manuscripts testify, Christmas trees were placed in the churches in state of the ornaments they had the prophets icons. On the bottom of the tree the icon of Prophet Jesse on the top a star and in the middle of it the icon of Christ blessing with His two hands.

Even today, the Ecumenical Patriarch on Christmas wears that sakkos called ” O Sakkos Tou Iessae” The mantle of Jesse where is embroidered with gold threads on burgundy velvet material the tree with the Prophets and Jesse at the bottom and Christ on the top.

After the sack of Constantinople and occupation by the Crusaders during XIIIth century all these items found in the churches were transferred to Italy especially to Venice. When the Byzantines took over Constantinople they found the city empty of all its treasures and relics, had more important things to take care of. So the tradition fade out.

In the West though the tradition of Christmas Tree flourished especially during Renaissance. Not only churches decorated Christmas trees but also the town squares shops and houses. The pine tree was chosen, imitating the Cedar of Lebanon, that is a tree that never throws its leaves but stands still during the strong winds of winter, so to be strong during the New Year facing any problems that we are going to face.

It is Saint Nicholas, in German Sankt Niklaus, that became Santa Claus. He is a very famous Saint of the Church who lived during the last days of the Christian persecution era on the IVth century in south Asia Minor a place called Myra. He spent all his wealth in giving to the poor and orphans and helped others in need.

Because of his spirit of generosity he was known all over the world, especially in the West. In the West I say because the East celebrates St. Basil another great father of the church who lived III Centuries later than Saint Nicolas in Caessaria of Asia Minor. He built orphanages and he helped also the orphans, the widows and all in need. He was throwing gold coins from the windows of the poor girls who needed dowries to get married. His feast day is celebrated on January first. In the orthodox countries the gifts are distributed on New Years eve.

It is an old tradition that the children they were putting their shoes at front of the door New Years Eve with a letter that St. Basil to leave them a gift. In the morning when they are waken up the first thing they are doing is to open the front door and see the gifts that “Aghios Vasilis” Saint Basil left for them. From the Mediterranean sight of Myra St. Nicholas went to the North Pole and so every body changed the tradition as it suits to them.

Another old tradition is caroling, Christmas songs and hymns that announces the birth of Christ. This tradition still continues in Europe and is strictly kept alive by the children who go door to door on Christmas Eve, New Years eve and Epiphany day and sing the carols and get tips from people. People has it as a good sign for the children to sing at their door steps, they consider it a joyful event and a good luck.

In the villages not only the children but also the adults as choir go from door to door and sing the carols. The people treat the adult carolers with homemade wine and sweets.

The food tradition, the drinks, the sweets and the main courses with the appetizers not only vary from country to country but from region to region and from village to village.

On Christmas Eve, it is also a tradition to eat stuffed cabbage leaves representing Christ wrapped in the manger, and the rice a sign of blessings of prosperity. Wine and other beverages are consumed to celebrate the event.

On New Year’s Day, a special cake called Vasilo Pitta the cake of Saint Basil is cut at every house hold. A gold coin is placed in the cake and is cut into triangle pieces for Christ, for Virgin Mary, for St. Basil, for the house, for the business, for the father, for the mother, for the children, an so on.

Who ever gets the coin is the lucky person of the year. This tradition comes from St. Basil when he was distributing loaves of bread to the poor he was putting in a gold coin to help them.

There are many traditions related to Christmas, New Year and Epiphany.

On Epiphany the household has to be blessed by the priest in order that all year the house is to have the blessing of God with that Holy Water which is prepared and read with special prayers in the church on the eve of Epiphany, January 5th. There are also carols for Epiphany that the children sing and go door to door.

The Christmas tree is taken down after the 7th of January, which is the feast day of Saint John the Baptist.