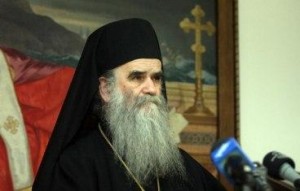 PODGORICA — SPC Metropolitan of Montenegro Amfilohije has referred to the western military alliance NATO as “the Fourth Reich.”

The media in Podgorica are quoting him as saying that NATO represented “a continuation of fascism and a desire to rule the whole world.”

This dignitary of the Serbian Orthodox Church (SPC) also appraised that it was good that the region was uniting “with Europe” – but noted that this should not happen “as part of NATO.”

“What is NATO’s reason of being? What is NATO, if not the Fourth Reich? What is it, if not a continuation of fascism and a desire to rule the whole world,” Amfilohije said, during a consecration ceremony for a renewed church near the town of Kolašin, northern Montenegro.

“We are going to Europe, but to contribute something, not only to beg around Europe. The first thing that Montenegro could do is to ask the NATO nations to disband the pact. That would be Montenegro’s contribution to Europe,” the media in Podgorica quoted the metropolitan as saying.

As for Kosovo and Metohija, he said the tyranny of Murad – the Ottoman Turkish leader killed during the Battle of Kosovo in 1389 – was “continuing” there:

“Now it is not Murad who is taking part in it, it is NATO, the EU, and the U.S., in other words, all those who continue with the tyrannies of the crusades, the Inquisition, Napoleon, and the Bolsheviks.”

“They defend human rights, and drop bombs on us, and call that a humanitarian bombing. Americans have built one of the largest military fortifications in the world in Kosovo, for humanitarian purposes. Our leaders need to think well. We should go to Europe, but to what kind? Europe such as it is – criminal, tyrannical, trampling on the poor – is that the Europe we need?,” Amfilohije asked.