Church marriage may be given legal status in Georgia 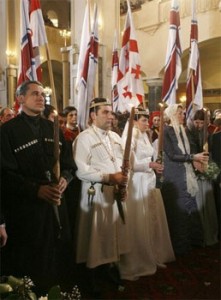 Recent months have seen more and more calls for Church marriage to be given legal status in Georgia.

“As a clergyman I would welcome it if Church marriage were given legal status in Georgia. There are regulations about the legal status of Church marriage in the legislation of many European countries, for example, in Greece. Thus, an official decision to provide Church marriage with a legal status will be a joyful event for myself as well as for the whole Orthodox flock,” said Metropolitan Seraphim (Jojua) of Borjomi and Bakuriani in his interview with the Khronika newspaper.

The head of the legal committee of the Georgian parliament Vakhtang Hmaladze explained in the interview with the same newspaper the government position on the issue, reports Blagovest.info.

“Without legal status the duties that spouses take upon themselves are simply all invalid. Today, they only have legal status on the basis of civil marriage.

The withdrawal of a Church wedding’s legal status is something that occurred under the Communist regime, but with the return of Church life in Georgia, many feel the time has come to return that status.