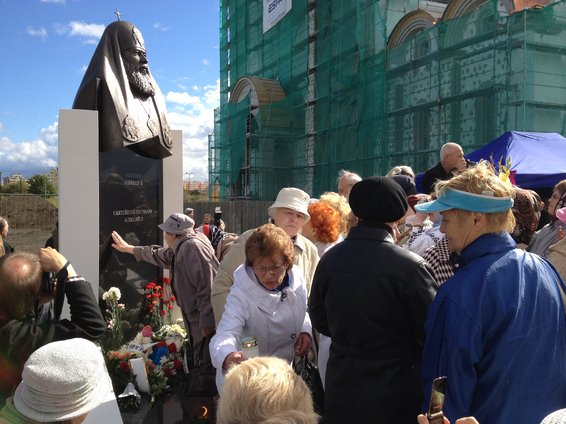 Crowds of Orthodox Christians, some of them teary-eyed, approached the outdoor bust in remembrance prayer. The church’s unfinished gray interior was open to the public as well. It was furnished with two make-do altars, a couple of gift counters and a prayer queue.

Savisaar said the church construction, mostly funded by donations and the City of Tallinn, will be finished in 2013. The mayor commemorated Tallinn-born Alexius II (1929 – 2008), Russia’s first patriarch of the post-Soviet era, who had been a supporter of founding the new church.

Among the invited guests were Moscow Mayor Sergey Sobyanin and Russian Railways director Vladimir Yakunin, but neither arrived for the ceremony, nor did any Estonian ministers.

The 40,000-euro bust’s sculptor was Alexander Litvinov and the aiding architect was Oleg Zemchugov, according to Postimees.

See a 360 panorama of the event here, photographed by Andrew Bodrov.