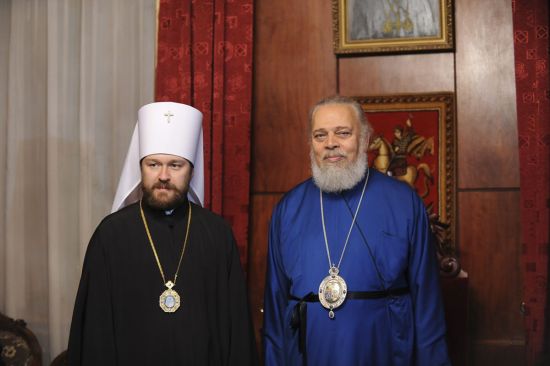 In November 2012, Archbishop Niphon of Philippopolis, representative of the Patriarch of the Great Antioch and All the East to the Patriarch of Moscow and All Russia, sent a letter to Metropolitan Hilarion of Volokolamsk, chairman of the Moscow Patriarchate’s Department for External Church Relations, in which he, with the blessing of His Beatitude Patriarch Ignatius IV, informed him of the Patriarch of Antioch’s support for the position taken by the Russian Orthodox Church with regard to the role of traditional spiritual values in the life of society.

The letter says, in particular, that the Orthodox Church of Antioch is indignant at the outrageous actions committed in some churches and monasteries of the Russian Orthodox Church, that she “condemns such actions as directed against the Universal Orthodoxy and that she is grieved to note that some Western countries see such behaviour as natural” within the human rights concept interpreted in a narrow sense, while in fact infringing upon the rights of other people.

His Beatitude Patriarch Ignatius “especially emphasizes that he shares the position” of the Russian Orthodox Church concerning human rights, the position which “His Holiness Patriarch Kirill expressed many times, saying that human rights are impossible without taking into consideration traditional spiritual values.”

“Bearing in mind our Saviour’s words, “If the world hates you, know that it has hated me before it hated you” (Jn 15:18), our See of Antioch is confident that the Holy Russian Church, led by her brilliant Primate and preacher of God’s word, will withstand this one more trial and will win a great victory, for our Lord Jesus Christ said, “In the world you will have tribulation. But take heart; I have overcome the world” (Jn 16:33)”.