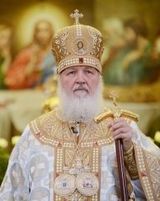 Moscow, January 6, Interfax – Patriarch Kirill of Moscow and All Russia said the Russian Orthodox Church is determined to continue its work despite the campaigns against it.

“We will continue caring for the poor and the sick, we will continue to openly call sins sins. That’s what our Savior called on us to do. He also warned us that people will resist the word of God and the world will rise against the Church,” the Patriarch said.

The anti-church campaigns that took place in 2012 are a consequences of the strengthening of the Church positions and influence in society, he said. The Patriarch also said people’s confidence in the church and the clergy is high in Russia, which is confirmed by public opinion polls, “and that gives to peace to the enemy of mankind and those who follow him.”

Patriarch Kirill said more and more people in public and political life are becoming firm in their morals, which are based on evangelical values, adding that these people some from various social groups, have various levels of education and income, and often have various political views.

“I am happy that our society is becoming more perceptive to the word on Christ. This doesn’t mean that we need to calm down and rest on our laurels. On the contrary, this means we should work with more energy, resist injustice, lies, and sin more actively,” the Patriarch said.