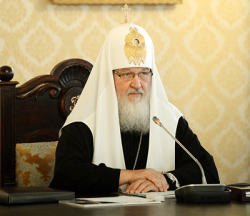 Moscow, September 5, Interfax – Patriarch Kirill of Moscow and All Russia has denied the allegations on the increasing mingling of the church and the state in Russia.

“People who say that the Church in Russia is very closely connected with the state are wrong. It’s not true,” the Patriarch said in an interview with the Japanese media before his visit to Japan.

Patriarch said the Church is working with the authorities on the restoration of cultural monuments, education of the youth, culture, and social sphere, but has no goal to influence state politics.

“However, we are preaching to people, including our authorities. We bring certain values to our people, primarily moral values. And we insist that politics should be based on morals. Politics without morals do not benefit those who pursue those policies and those who are influenced by these policies,” he said.

For this reason, the influence exerted by the church on political life is “moral, not political.”

“Our ill-wishers are telling tales about the Church, and these tales spread worldwide became stereotypes spread fast,” he said.

Patriarch Kirill said the Church wants to influence everyone, “including state figures and ordinary people so that the morals the church preach are adopted by our people’s consciousness.”

The Patriarch said the Russian Church “has been very successful in its mission” for the past 20 years because at the beginning of its activities “the majority of people were atheists and the percentage of believers was not high.” Patriarch Kirill said up to 80% of people in Russia have been baptized, 65% said they have an affiliation with the church, and over 40% go to church at least once or twice a year. The number of believers who go to church every week has increased and the average believer has become younger, the Patriarch said.

“We are talking about the increase of spiritual influence on the life of our society and people. It’s our task. We have a duty to do it and we will do it,” Patriarch Kirill said.