We are close to witnessing an immense historical event. This will, for sure, be part of the history books and it has been long-awaited (for seventy years) by people who are not witnesses to it today. The upcoming re-unification of the Russian church and its branch, the Russian Orthodox Church Outside of Russia is something that has practically no historical precedent. The overwhelming majority of schisms and splits, if we look back to history, did not lead to unity. This split, on the other hand, will be mended by unity.
| 06 May 2007

Q. Fr. Vladimir, what is the significance of this unification? 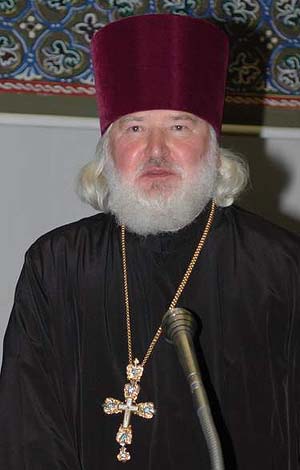 We are close to witnessing an immense historical event. This will, for sure, be part of the history books and it has been long-awaited (for seventy years) by people who are not witnesses to it today. The upcoming re-unification of the Russian church and its branch, the Russian Orthodox Church Outside of Russia is something that has practically no historical precedent. The overwhelming majority of schisms and splits, if we look back to history, did not lead to unity. This split, on the other hand, will be mended by unity.

Q. What are the reasons and history behind the schism?

The way it all began was when about two million Russians were forced to emigrate from Russia . They loved their country deeply and brought with them their Orthodox faith, traditions, and keen intelligence. They were the reason Orthodoxy spread in the West: through their life, mainly, and their contact with many other people. So, you see, God has His ways of making something bad – a split in the Church – into something wonderful – introducing people to Orthodoxy. This migration created many churches and clergy in the Western world. At one point, the bishops of the West decided to create their own Synod. This was a straightforward challenge to the Mother Church back in Russia and the beginning of the schism. Metropolitan Sergius (Starogorodskiy), who directed the Russian Church in absence of a Patriarch, forbade them to serve. Some of the Western bishops became angry and some wanted to unite and keep close to the Russian Church . It was a big divide – those who prayed for Metropolitan Sergius and those who didn’t. The three barriers, as stated by ROCOR, to Liturgical unity with the Russian Church after this were: 1. ROCOR canonized and venerated the Royal Family as saints much earlier than ROC did. 2. ROCOR canonized and began venerating the new martyrs of the Russian Orthodox Church much earlier as well. 3. ROCOR could not accept the policies and tactics of Met. Sergius (his “compromise”, seen as softness, with regard to the Soviet government).

Now, the Russian Orthodox Church has canonized the New Martyrs of Russia (in 2000) and the Royal Family and not without the efforts of St. Tikhon’s University. We currently have an immense database (30,000 New Martyrs and their fate) which is only becoming larger every day. We have published books about them as well, including a six volumes just about the New Martyrs of Butovo. Thousands and thousands of sufferers were brought to Butovo, just outside of Moscow , and shot there. Then they were thrown into the ground and bulldozed over. Our University, back then only an Institute, was the first to erect a large wooden cross at the site. We were also the first to serve Liturgy in the small wooden church, which was built later. Two years ago Metropolitan Laurus and Patriarch Aleksey put in the first stone of the cathedral, which is now ready to be consecrated (on June 19th). Its main Altar will be dedicated to the Resurrection of Christ. But also, because of the union of the two churches, the second Altar will be dedicated to St. John of Shanghai. He was canonized by ROCOR, but not yet by the Russian Orthodox Church. So this is another wonderful part of re-unification – we get new saints to venerate and pray to. Finally, Communion with each other, Westerners coming to Russia , will bring us all closer and perhaps Westerners will see the beauty of Russia and Russian Orthodoxy once more. Seventy years of separation has brought us back, through a miracle of God, to re-unification!