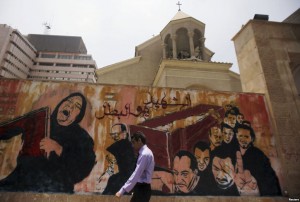 A man walks past graffiti depicting a funeral outside a church near Cairo’s Tahrir Square on Thursday. The graffiti reads “Martyr or hero”. Photo: CNS/Amr Abdallah Dalsh, Reuters

The head of the Coptic Church of Egypt, Pope Tawadros II, has praised the campaign that ousted the country’s elected president and leader of the Muslim Brotherhood, Mohamed Morsi, on Thursday evening.

Pope Tawadros, the leader of the largest religious minority in Egypt, said that Egyptian people had recovered their “stolen revolution” – a reference to how the Arab Spring of 2011 had led to an increasingly hardline Islamist government.

“It’s wonderful to see the Egyptian people recovering their stolen revolution in a civilised manner with the idea of ‘rebellion’ and the sacrifice of its great youth. I pray for all the people of Egypt,” he said.

The Anglican Bishop of Egypt, Dr Mouneer Hanna Anis, also welcomed the overthrow, which he said was good news for Christians in the majority Muslim country. “At last, Egypt is now free from the oppressive rule of the Muslim Brotherhood,” he said.

Morsi was officially deposed from office at 7pm local time on Thursday following a week of protests at his rule and the intervention of the Egyptian military. The chief of the armed forces, General Abdel-Fatah al-Sisi, announced that he had suspended the constitution and nominated the head of the constitutional court, Adli Mansour, as interim president.

General al-Sisi told a panel of Egyptian representatives which included Pope Tawadros that the rebels had an “historic responsibility” to build a strong, stable and inclusive society.

A Catholic priest based in Cairo described Thursday’s events as a “happy end”. He told The Tablet: “We could have had a terrible confrontation between the Muslim Brothers and the majority, and one day ago this was our fear. It didn’t happen. I just spent two hours in town right now to see how it is. Everyone is celebrating the happy end of this political crisis.”

He said the challenge was to find solutions that respected all sectors of Egyptians society. “The new people in charge of the country will have to find political solutions to the diversity of the Egyptians, to give answers to their needs, such as education, work, and so on) and there is a long way to go, but the country has shown its maturity and we are very confident in their capacity. The military do not want to play this role. But their intervention has allowed [the country] to avoid bloodshed.”

But the head of the Coptic Orthodox Church in the UK, Bishop Angaelos, warned that Egypt’s first priority must be reconciliation and unity. He called on the country’s new leaders to work to resolve “years of fragmentation, distrust, anger and resentment”.

“The next weeks and months will be crucial, needing the support of every Egyptian and guiding him or her to no longer think in terms of tribes or separation, but rather in terms of unity and collaboration for the good of all,” he said.