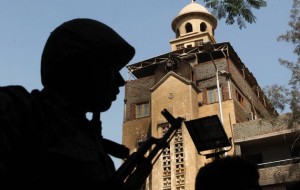 One person died and dozens were wounded during clashes between Muslims and Christians late Friday night outside a Coptic church in Egypt’s second city, state newspaper Al-Ahram reported, in the latest violent sectarian row in the Muslim-majority country.

A quarrel between two young men, one Christian and one Muslim, morphed into a family feud that sparked clashes in a western district of Alexandria.

The two sides threw firebombs at each other before security forces intervened and cordoned off the area around the church.

Police arrested eight people after about two hours of fighting.

In addition to the political and economic turmoil Egypt has endured since Hosni Mubarak was overthrown in February 2011, tensions have risen between Muslims and Christians, especially since the election of Islamist President Mohamed Mursi in June.

Christians make up about 10 per cent of Egypt’s 84 million people and have complained that the authorities have failed to protect them since Mubarak was ousted, giving radical Islamists a free hand.

At least five people were killed and more than 80 injured in clashes last month between Christians and Muslims at the Coptic Orthodox Cathedral in Cairo after a funeral service for four Christians killed in sectarian violence with Muslims.