Clergy of the Trinity Church in Pyongyang Visit Khabarovsk 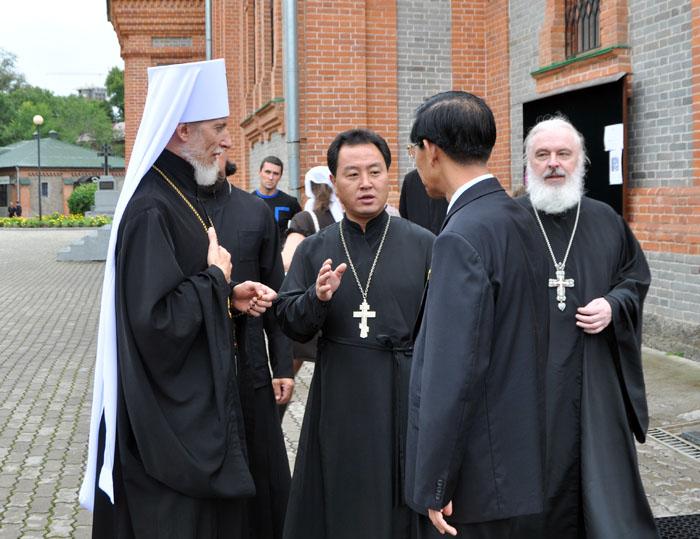 On August 22, 2012, the Day of St. Matthews, Metropolitan Ignaty of Khabarovsk and Priamurye celebrated at the Church of St. Innocent of Irkutsk. Among his concelebrants were priests from the Church of the Holy Trinity in Pyongyang, North Korea, Fathers Kim and Ioann Ra. The delegation from North Korea also included Kim Shi Song, chairman of the North Korean Orthodox Committee, and Nicolay Kim, the precenter of the Orthodox church in Pyongyang, the website of the Priamurye Metropolia reports.

With the blessing of Metropolitan Hilarion of Volokolamsk, head of the Moscow Patriarchate’s department for external church relations, Archpriest Igor Zuev, rector of the Church of St. Nicholas in Moscow, came to Khabarovsk to meet with the delegation from North Korea. Father Igor had been rector of the Church of St. Innocent of Irkutsk, the oldest church in Khabarovsk, when it was visited by Kim Chen Ir during his working trip to Russia’s Far East back in August 2002. It was after that visit that the decision was made to build an Orthodox church in Pyongyang. In 2006 it was consecrated by Metropolitan Kirill of Smolensk and Kaliningrad (now Patriarch of Moscow and All Russia).

The chairman of the Orthodox Committee in North Korea described that visit 10 years ago a historic event which helped develop Russian-Korean friendship.

Metropolitan Ignaty, in his pastoral homily, said in particular, ‘May our common prayer strengthen us in the union of peace and love and help us to bring our faith to those who have not yet heard the good news of Christ’.