Members of Finland’s clergy are showing a greater interest in EU politics. Representing four different parties and both the Lutheran and Orthodox churches, five will be on the ballot in the next European Parliament elections. 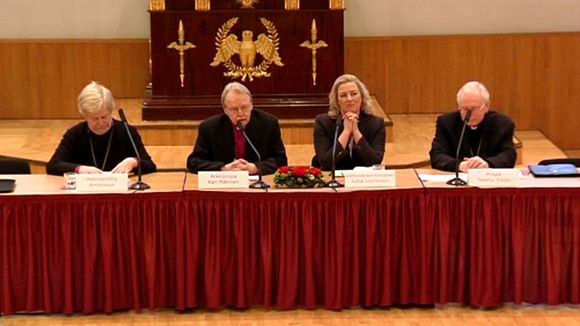 Finance Minister Jutta Urpilainen and clergymen on Tuesday on a panel for a discussion of the ethics of the economy. Photo: Yle

Tough economic times have raised many ethical questions about the market economy and its impact on societies. This, in part explains why five members of the Finnish clergy are in the running to take up seats in the next European Parliament.

Some of them have a history in politics. Greek Orthodox pastor Mitro Repo was elected to the European Parliament as a Social Democrat in 2009 and Lutheran Bishop Ilkka Kantola to the Finnish Parliament as a SDP representative in 2007. Sanna Lehtinen, a Lutheran minister, is in the running as a Centre Party candidate. She current works as an assistant to former Prime Minister Mari Kiviniemi. Another Lutheran pastor, Timo Keskitalo, has announced as a candidate for the Christian Democrats, while Pietarsaari’s Lutheran Vicar Bo-Göran Åstrand is standing as a Swedish People’s Party candidate.

Europe’s economic problems have created unemployment and poverty, but some claim a crisis in the economy is also the cause of a rise in racism, greed, self-interest and xenophobia.

“I admit that there has been a feeling of helplessness,” Finance Minister Jutta Urpilainen told a seminar on ethics and the economy Tuesday.

“The Church wants to bring a human and humanitarian perspective to lives dominated by the economy,” responded Lutheran Archbishop Kari Mäkinen.

In an interview with Yle, Mäkinen stressed the role of individual clergy and not churches as institutions.

“I think it is very good that even priests are socially active and take part in the management of our common interests, but the church as a church does not participate in actual political activities, or political debate as such. On the other hand, it does take part in social debate,” said Mäkinen.

“The divide between the church and political activity is a valuable thing. Historically, when they have been mixed it has not been good for either the church or for society. Think of, say, the history of the papacy or the role of the church in some periods in Russia,” points out Metropolitan Ambrosius.