On January 25, 2013, a conference on the Old Rite in the Life of the Russian Orthodox Church: Past and Present was held within the 21stInternational Christmas Readings at the St. Sergius Chamber of the Church Councils Hall in the Church of Christ the Saviour. The conference held already for the eighth time was chaired by Metropolitan George of Nizhniy Novgorod and Arzamas, member of the Moscow Patriarchate Department for External Church Relations’ commission for Old Belief parishes and cooperation with the Old Belief community. Papers were presented on both historical themes including the First All Russia’s Common Faith Congress, new martyrs from the Common Faith community, relations with the state authorities and some today’s aspects of the life of the Old Rite community in the Russian Orthodox Church. 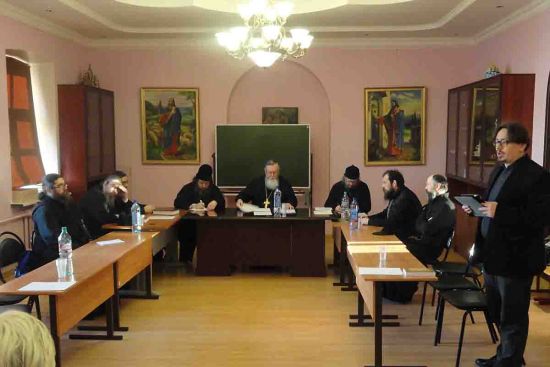 The conference was followed up by a round table on urgent problems in the life of Old Rite (Common Faith) parishes of the Russian Orthodox Church. It was held on January 26 at the Patriarchal Center of Old Russian Liturgical Tradition at the Church of the Protecting Veil at Rubtsovo near Moscow.

The round table focused on the Divine Liturgy celebrated according to the old rite by Metropolitan Juvenaly of Krutitsy and Kolomna on January 12, 2013, at the Kremlin Cathedral of the Assumption. The hierarchal service was held thanks to Patriarch Kirill’s decision who authorized to complete in this way the events held to mark the 100th anniversary of the First All Russia’s Congress of Common Faith Believers.

According to the participants, this event unprecedented for over three and a half centuries became a landmark in the history of the Common Faith community. On the proposal by Rev. Ioann Mirolyubov, head of the Patriarchal Center for Old Russian Liturgical Tradition, who chaired the round table, it was agreed to send Patriarch Kirill the following thank-you letter:

On behalf of the parishioners and clergy of the Old Rite (Common Faith) parishes of the Russian Orthodox Church, we would like to express deep heartfelt gratitude to Your Holiness for the opportunity you have given us to celebrate the Divine Liturgy according to the old rite at the Kremlin Cathedral of the Assumption on the commemoration day of St. Macarius, Metropolitan of Moscow.

With sincere filial love we dare ask Your Holiness to continue showing your mercy for us so that in the future as well we could have an opportunity to ask for your blessing upon conciliar celebrations according to the old rite at the old time monuments of general significance for the church history.

We express our unanimous wish to ask Your Holiness to lead a prayer service according to the old rite at the relics of St. Sergius of Radonezh or other shrine of the Old Russia on a day chosen by Your Holiness’.

The round-table participants also discussed joint plans for celebrations at church-wide shrines and other proposals for further development of the Common Faith movement.