Permission to receive the sacraments in the Orthodox Church has nothing to do with hospitality, although some may see it that way. The root of the question centers on the importance of doctrine. The Orthodox Church is a doctrinaire church. To say you are Orthodox means you are committed to certain specific doctrines. The most troublesome doctrine is that the Orthodox Church is the Church of Christ and it only has remained faithful to His teachings.
| 18 December 2008

Before offering the sacraments of Holy Communion or Holy Unction at the church services, I announce that only Orthodox Christians are eligible to partake. This announcement is necessary but most difficult because it is sometimes interpreted as not being hospitable to guests. Some argue that we certainly would not invite guests into our home and offer them no refreshments. Or a question often asked is, “Would Christ invite you to His house and not feed you.” I suppose to answer this question we could refer to the parable of the marriage banquet in Matt. 22: 1-14. The parable concerns an invited guest who was cast out because he did not have his wedding garment. Some say this is one reason why the Orthodox Church does not give out Holy Communion freely. 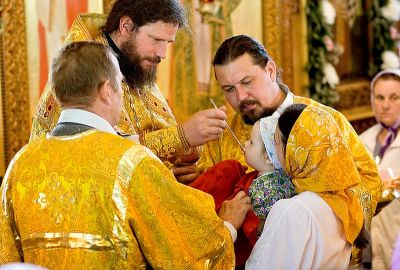 Permission to receive the sacraments in the Orthodox Church has nothing to do with hospitality, although some may see it that way. The root of the question centers on the importance of doctrine. The Orthodox Church is a doctrinaire church. To say you are Orthodox means you are committed to certain specific doctrines. The most troublesome doctrine is that the Orthodox Church is the Church of Christ and it only has remained faithful to His teachings. Those who disagree with this doctrine cannot say they are Orthodox. By receiving Holy Communion you are publicly proclaiming that you accept and believe these and all other doctrines of the Holy Orthodox faith. If you have difficulty understanding them but are willing to conform to them, you could still receive the sacraments without being a hypocrite. We would not want to turn our guests into hypocrites.

What is the source of the questions about inter-communion? According to Fr. Paul Lazar, Dean of Students at St. Vladimir’s Seminary, it is American religiosity. (Concern 1974) He believes that the American way of religion called Pluralism has gradually come to pervade the consciousness of Orthodox Christians. Pluralism teaches there are many ultimate Beings, Principles or Substances. One of the slogans of American Religion is that the purpose of religion is to teach love since there are many truths. The nature of this love is not defined. In American religion, adjusting and belonging to the world is the main goal. The purpose of religion is to give people peace of mind, security and religious purpose to life. It is a way of sanctioning social patterns and cultural values. It helps society get along with generalities in which anything can fit. It means just believing in a higher being or power without saying anything specific about He, She, or It. All roads lead to the same source. Having faith that is all that is necessary. “One ends up with the curious notion of having faith in the act of having faith.” Faith is good for you. It is healthy according to recent studies. It helps relieve stress. It gives good feelings. Pluralism is certainly noble and has value in facilitating many faith groups to coexist in a democratic society, but it is not Christian.

Father Lazor comments that in American religion many denominations coexist under the umbrella of these generalities. Since all religions really teach the same thing – love, all must adjust and make sure no one is offended. This leads to nebulous public prayers and reactions if Christ is mentioned. “Doctrine divides but Love unites” goes the slogan. American religion excludes doctrine and for this reason runs squarely into Orthodoxy which claims to have remained faithful to the original Christian doctrines.

Throughout its history, the Orthodox Church has made adjustments so as to fit into a culture in order bring about its conversion. This is the reason there are so many cultural variations in the Orthodox Church. When certain adjustments are not possible without compromising its orthodoxy, the church “digs in its heals” and for this is labeled as being bigoted and out-of- date. To quote Father Paul, ” Despite its weakness in education and discipline, the Orthodox Church still remains the least adjusted to the American reality. The authentically Orthodox content of the religious mind of many of its members might have been eroded away and replaced by content less American religious ideas, but all the same, the practices and demands of the church have remained essentially unchanged.”

The church still uses Orthodox to describe itself. (Not politically correct) The services are still longer and not at times convenient to the American way of life. The doctrine of the Church as the Kingdom of God made present in Christ is taught. The Orthodox Church calls its members to repent, to change, and to adjust their lives to be worthy of the Kingdom of God. Since American religion expects churches to adapt to the secular way of life and adjust to the individuals needs, it runs counter to Orthodoxy. It is for this reason that the Orthodox Church does not fit and usually loses out when it comes to mixed marriages and baptism of children.

The Orthodox Church teaches love like other religions. But the love that is taught is linked to truth. This truth is Jesus Christ who is the Way, the Truth, and the Life (John 14:6). Christianity is life in the Truth for it is the life in Christ in whom we are baptized. Being in the truth, Christians are called to live the truth. Love and truth are proclaimed at each Divine Liturgy. Just before the Eucharist is offered the Priest says, “Let us love one another that with one mind we may confess!” The congregation then affirms their belief in the “Father, Son and Holy Spirit” by reciting the creed. (One God not three or four or many.). Without the unity of love and truth, the holy elements of bread and wine cannot be offered. Christians are required to love the truth as revealed in Jesus Christ and all that goes with it. This includes all ethical behavior. If one is willing to accept and fulfill all that each Orthodox Christian is required to follow, he would never be deprived of Holy Communion. If a church community does all that is required to be orthodox, then inter-communion is welcomed. This is expressed when I concelebrate in other Orthodox Churches.

Fr. Paul stated that American Civil Religion does not have any notion of Christian truth. There are many truths. It uses love as its slogan. It does not require a church. Why would anyone attend many hours of church services if the same generalities of American religion can be obtained from other activities like football or golf. It is a religion of what? a love of what? a life of what? It is this deformed religion to which Orthodoxy must never succumb. It is from this deformed religion that many people must be reconverted. When this happens, questions about inter-communion will cease.