Communiqué from the Diocesan Office on the retirement of Archbishop Gabriel 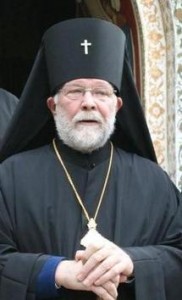 1. Archbishop Gabriel’s retirement. Archbishop Gabriel has informed the members of the Council that, taking into account the worsening of his health, he has decided to retire completely, and that he has written to this effect to His Holiness the Ecumenical Patriarch, asking him to accept his request to retire on health grounds (Article 40 of the Diocesan Statutes). This retirement is effective from 15th January.

Archbishop Gabriel, who is also Rector of the Cathedral of St Alexander Nevsky, has informed the Council that, until the election and enthronement of his successor, he has nominated Archpriest Alexis Struve to replace him at the Cathedral as temporary Rector.

The function of Rector of the Institut Saint-Serge will be held provisionally by the Locum Tenens of the Archiepiscopal Throne, together with the Dean of the Institute.

A letter was read addressed by Archbishop Gabriel to the clergy and faithful of the Archdiocese. It has been decided to distribute this letter to the parish priests and put it on the diocesan website.

For their part, the members of the Council assured Archbishop Gabriel, in the name of the clergy and laity of the Archdiocese, of their understanding, their support and their prayers.

2. The appointment of a Locum Tenens

In accordance with Articles 52 and 53 if the Statutes of the Archdiocese, the Diocesan Council has decided to ask His Holiness to nominate a Locum Tenens for the Archepiscopal Throne. The duties of the Locum Tenens will be responsible for current business and oversee the meeting of the EGM (Extraordinary General Meeting). His name will be commemorated in place of the diocesan archbishop once it is known. Until then, his grace Gabriel Archbishop of Comana is to be commemorated.

3. The 10th anniversary of the death of Archbishop Serge

On this anniversary on 22nd January, the parishes are asked to celebrate a panikhida on that day or the following Sunday. A Liturgy for the Departed will celebrated on that day in the Church of the Dormition in the cemetery of Ste-Geneviève–des-Bois, followed by a panikhida at the tomb of Archbishop Serge in the crypt.