Concerning the growing tension in Kosovo and Metohija 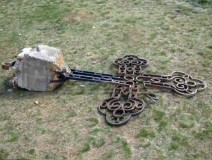 In January 2013, a wave of the defilement of Orthodox churches and burial places has swept Kosovo.

According to the press service of the Raska-Prizren diocese of the Serbian Orthodox Church, the 19thcentury Church of the Holy Trinity at the Babljak village near Urosevac was plundered and defiled. In 1999, it survived arson by extremists.

In less than ten days, vandals have destroyed over one hundred Serbian Orthodox gravestones throughout the region.

On the Epiphany Day, January 19, 2013, a mob of aggressive members of the Self-Determination movement caused disorders near the Monastery of the Assumption at Jakovice and it was only the presence of the KFOR armed guards that prevented their entry into the monastery. However, most of the Orthodox churches remain unprotected against vandals and criminals. The recent developments are evidence to it.

The official website of the Raska-Prizren Diocese has reported that in the mid-January 2013, the World War II Memorial to Yugoslavian anti-fascists including ethnic Albanians at Kosovo Vitina was demolished with the help of construction machines. It is regrettable that their today’s descendants do not consider it necessary to honour the memory of those who by their blood contributed to the victory over the man-hating ideology of fascism.

According to Bishop Feodosije of Raska-Prizren, the level of security has dropped today to the lowest mark since the notorious pogroms of March 2004 when Albanian extremists burnt down and destroyed a great number of Orthodox churches.

These facts cannot but raise the question about the future awaiting the Orthodox population in Kosovo and Metohija and about what guarantees of security may be established for the preservation of the Serbian Orthodox Church’s holy places in the territory of Kosovo and Metohija.