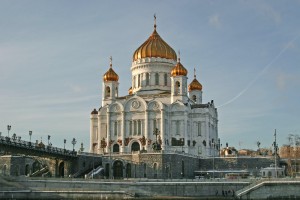 On 29 May 2013, an inter-regional conference, “Grand Duke Sergei Alexandrovich in the service to Moscow and the Fatherland” opened at the Hall of Church Councils of the Cathedral of Christ the Saviour. A litiya was celebrated at the tomb of the Grand Duke in the Church of St. Romanos the Melodist in the Novospassky Monastery.

The conference is being held in the framework of the 2013-14 programme “In the service to Moscow and the Fatherland. Grand Duke Sergei Alexandrovich and Grand Duchess Elizabeth Feodorovna.”

Archpriest Sergiy Zvonarev, secretary for far abroad countries of the Moscow Patriarchate’s Department for External Church Relations, read out a report of its chairman, Metropolitan Hilarion of Volokolamsk.

Taking part in the conference, which will last till May 30, are clerics of the Russian Orthodox Church, scholars, public figures, and journalists.