Conference ‘The Future of Christianity in Europe.’ completes its work in Warsaw

On 30 November 2013, the Russian-Polish Conference, ‘The Future of Christianity in Europe. The Roles of Churches and Peoples of Poland and Russia,’ completed its work at the Stefan Wyszyński University in Warsaw. 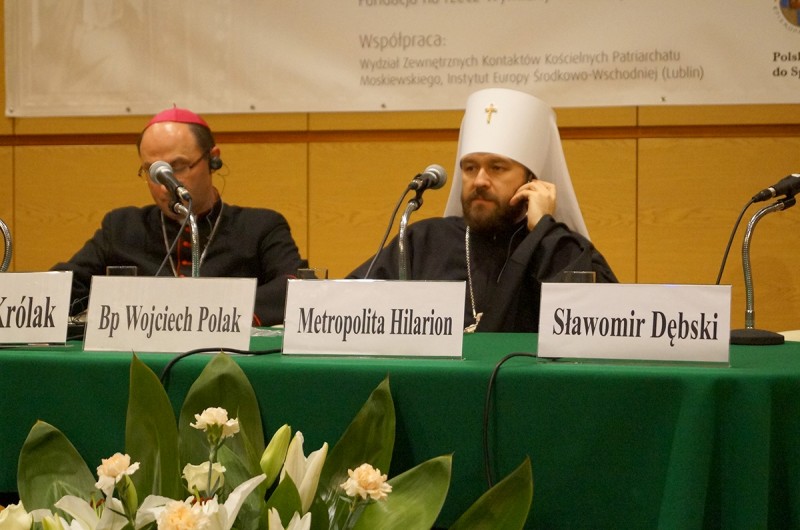 Prior to the final session, Metropolitan Hilarion of Volokolamsk, chairman of the Moscow Patriarchate’s Department for External Church Relations, and the retired Archbishop Henryk Muszyński, former Metropolitan of Gniezno and the Primate of Poland, were honoured with the award ‘For Merits in Promoting Tolerance-2013’, which the Tolerance Foundation gives to people who promote cooperation among people of different faiths on the basis of equality.

Metropolitan Hilarion noted that he considered this award as recognition of the efforts taken for reconciliation between the peoples of Poland and Russia and the development of mutual understanding between the Russian Orthodox Church and the Catholic Church in Poland. ‘In our work we are inspired by the example of His Holiness Patriarch Kirill of Moscow and All Russia and Archbishop Józef Michalik, President of the Polish Episcopal Conference, who signed a historic message to the peoples of Poland and Russia in 2012. Our meeting today is devoted to the deliberations on the words of this message and on the ways of the implementation of its appeal.

The DECR chairman said in his address to the participants: ‘We have much in common in our history, in our situation at present and in our vision of the future. I believe that we should meet to discuss concrete problems, including the presence of Christian symbols in public space of European countries and the protection of Christian traditional values. We can tell many things to the secular world in order to help people find a right way and live in keeping with Christian moral teaching.’

Answering the question of a venue and time of a meeting of His Holiness Patriarch of Moscow and All Russia with the Pope of Rome, Metropolitan Hilarion remarked that at present it is hard to say when this meeting may become possible. He added: ‘We always say that this meeting should be thoroughly prepared as it will be a historic one because the Patriarch of Moscow and All Russia and the Pope of Rome never met. This meeting should open a new page in relations between the Russian Orthodox Church and the Church of Rome.’ Metropolitan Hilarion mentioned the situation of Christians in the Middle East as a main topic of a possible meeting.

That same day in the evening, members of the delegation of the Russian Orthodox Church who took part in the Conference with the blessing of His Holiness Patriarch Kirill of Moscow and All Russia attended Vespers at the Catholic Cathedral of St. John the Baptist in Warsaw.

After the service, which was celebrated by Archbishop of Warsaw Cardinal Kazimierz Nycz, Metropolitan Hilarion read out the final document of the Conference.