(An edited sermon given by Dr. Lewis J. Patsavos on March 21, 1999 at Nativity of the Virgin Mary Church, Chelsea, MA)

Change in the New Testament is referred to as conversion, “metanoia” in Greek. In modern usage, the word conversion has attached to it certain overtones which arouse impressions of religious revivals with dramatic declarations for Jesus Christ, and sudden ­ and even shattering ­ transformations in life. This, however, is not the way in which the term is used, much less understood, in the New Testament.

One may have many attitudes to God. A person may for all intents and purposes see God as a remote being who arbitrarily fashions the destinies of men and women. Or, one may be far removed from God, a person for whom God is not a real factor in life. One may be so caught up in the worldly distractions of life, that for long periods of time that person’s relationship to God is distant and aloof. 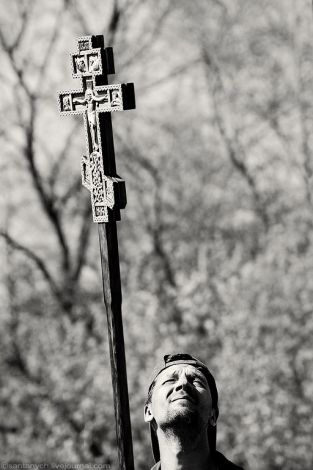 Or, a person may be evading God. Such a person’s evasion is not due to intellectual doubts or tot he inability to understand. It is due to the fact that one does not wish there to be a God. Evading the fact of the existence of God may sometimes be conscious, sometimes unconscious. A person may be well aware of God’s ubiquitous nature, and yet actively choose to ignore it. To do otherwise would place one in direct judgment because of a frivolous or provocative lifestyle.

But it may be that there is an attitude to God which is more common than the two just mentioned. It is an attitude which has, so to speak, many levels within it. It includes the person who acknowledges the presence of God, but for whom God is on the margin of life. It is an attitude of a courteous but uncommitted indifference.

It includes the attitude of the person for whom religion has a real enough place in life. One fulfills one’s formal religious obligations and even rejoices in liturgical rites and rituals; but such religious formalism rarely or never translates into acts of love toward’s one’s fellow human beings.

It includes the person who does know times when God is real, but for whom these times are the exception rather than the rule. In a moment of crisis, such a person may indeed turn to God, but when all is going well, one can handle life well enough alone.

How is this change of conversion brought about? In this change the human person and God cooperate. We might well say that to produce this change in men and women, God needs their help. God invites us to commit ourselves wholly to Him, and we are free to accept or refuse His invitation. There can be many reactions to an invitation and an offer such as this. There can be the reaction of stubborn disbelief, opposition and abuse, or argument and dispute. Or, there can be the reaction of the sudden realization of the meaning of the Cross and of the open and receptive heart. The invitation of Christ provokes different reactions in different hearts.

What, then, is the saving reaction of real and true conversion? Simply put, it is the awakened awareness of past disobedience to the law of God. It is not simply regret for the consequences of that disobedience. It certainly involves that, but it must involve very much more besides. It is clear that when one responds to the invitation of Christ, there must be certain changes in one’s life. Conversion begins with repentance and is founded from beginning to end in trust to Jesus Christ.

There can be little doubt of the reality of the phenomenon of conversion. There is still less doubt of the need for conversion in the world of today. There is need within the ranks of those who comprise the contemporary Church. Those who made up the early Church understood that they must be different from the world around them. Today’s Christians, however, have undergone a process of continual adjustment to the world and an increasing conformity to its standards, until the lines of demarcation are obscured and it is by no means clear who is the Christian and who is the person of the world. The number of pledged, committed, decisive Christians is perilously small.

There is need for conversion within society in general. The moral fiber of society is shockingly low. The sanctity of the marriage bond is undermined. The unnatural vices abound. The menace of drugs has become more acute than ever before in this country, while crimes of violence increase at an alarming rate. And what is to be said of a society in which the educational authorities think it necessary to hold special classes for school-age girls who are unwed mothers? The need for a turning to God is self-evident. We have come to a stage when not only Christian theology, but even the Christian ethic, is under deliberate attack.

For most perhaps, the moment of decision will be the moment we accept what it truly means to be a member of the Church ­ to attend church services faithfully; to partake of the sacraments regularly; to be instructed in the Orthodox faith seriously; and to abide by its ethical standards honestly. If this is so, the moment we take our religious obligations seriously should be the most decisive moment in our life. It should be a moment of the most definite and far-reaching consequence.

There follows one inevitable conclusion. As things are today, Church membership is taken far too lightly. As a result, for too many Orthodox Christians, being a member of the Church is far too easy, far too undemanding, and far too indecisive. There is too much opportunity to drift or slip casually into the Church as an occasional religious encounter for good measure; there is too little opportunity to mark faithful participation in the liturgical and sacramental life of the Church as the turning point in our relationship to God.

All this points to the fact that the necessity of decision is of paramount importance. There are two kinds of decision. There is the decision of the person who has been a stranger to Christ and the faith; but there is the equally important decision of the person who has always identified with the faith and the Church, but for whom the act of deliberate acceptance must be equally decisive.

Will we heed the invitation and make the decision to change our lives, committing them wholly, and uncompromisingly, to the Lord we profess? Or will we allow the occasion to pass us by? The decision is entirely ours.