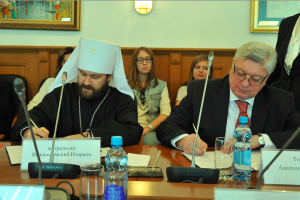 Metropolitan Hilarion of Volokolamsk, head of the Department for External Church Relations, in his capacity as rector of the Ss Cyril and Methodius Institute of Post-Graduate and Doctoral Studies, and Dr. A. Torkunov, rector of the Moscow State Institute of International Relations (university) (MGIMO) under the Ministry for Foreign Affairs, signed a cooperation agreement between the two educational institutions, during the DECR chairman meeting with MGIMO faculty and students.

In his welcoming address, the rector of MGIMO recalled the cooperation agreement he and Metropolitan Kirill of Smolensk and Kaliningrad (now Patriarch of Moscow and All Russia) signed between MGIMO and the DECR branch of the post-graduate school of the Moscow Theological Academy back in 2005, noting with satisfaction that through all the years since the signing, the cooperation was systematic and substantial.

“I believe the principal result of the cooperation is that our students are increasingly drawn to the spiritual values of Orthodoxy”, he said referring to St. Alexander Nevsky’s Church at the university attracting both its students and local people. Students, he said, seek to implement the spiritual values fostered in them by such concrete endeavours as, for instance, patronizing orphanages.

Dr. Torkunov underscored the importance of cooperation between secular and theological institutions in the field of education. He gave high value to the work carried out by Metropolitan Hilarion in international and external church activity and to his educational efforts through TV programs and documentaries he creates.

Metropolitan Hilarion spoke briefly about the work of the Ss Cyril and Methodius Institute as the highest body in the educational system of the Russian Orthodox Church.

The cooperation agreement signed by Metropolitan Hilarion and Dr. Torkunov provides for participation of the Ss Cyril and Methodius Institute postgraduates and doctoral candidates in the MGIMO training programs and MGIMO students in the Institute’s programs, cooperation in advanced training, holding joint conferences, seminars, round tables, expert meetings, scientific studies as well as preparation of publications on subjects of mutual concern including those dealing with the role of the religious factor in the world politics and international relations today.

According to Metropolitan Hilarion, the signing of the agreement “marks the next stage in the development of relations between the Russian Church and MGIMO”.

Participants in the meeting at MGIMO had an opportunity to hear the lecture by Metropolitan Hilarion on the Religious Factor in International Relations. After the lecture, he answered questions from professors and students.