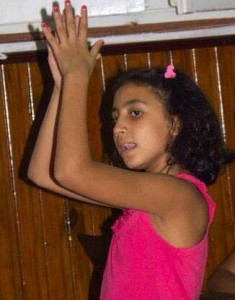 CAIRO, Egypt, August 9, 2013 (Morning Star News) – A Coptic Christian girl walking home from a Bible class at her church was shot and killed this week in Cairo by an unidentified gunman, human rights activists said today.

Amid a near-constant din of threats and scattered attacks against the Christian population in Egypt by militant political Islamists, the rights representatives said 10-year-old Jessica Boulous of the Ain Shams section of Cairo was killed early Tuesday evening (Aug. 6) while walking from the Ahmed Esmat Street Evangelical Church through a market to her home with her Sunday school teacher.

The teacher turned to buy an item at a market stall only to turn back and find Jessica lying in the dirt in a puddle of blood, rights activists said. A Muslim shopkeeper who knew Jessica saw her fall to the ground and ran to her side. He took off his shirt, wrapped it around her motionless body and rushed her to a hospital, but she was already dead.

A single bullet had passed through her chest and heart, killing her instantly, witnesses said.

No one has claimed responsibility for the killing. Zakaria, pastor of an evangelical  church in Egypt, said he didn’t know for sure if the shooting was religiously motivated but quickly added that violence against Christians “seems to be normal” in Egypt now.

Violence or intimidation against Christians has become almost a daily occurrence in most parts of Egypt. In the aftermath of the protests that led to the removal of Mohamed Morsi as president, militant supporters of Morsi have publically scapegoated the Coptic Christian minority for the Islamic Brotherhood-backed president’s fall from power. Many have called for revenge against Christians. Less than 12 hours after the Egyptian military announced that it had expelled Morsi from office, reports of attacks against Christians by Morsi supporters began.

After numerous attacks for about a week and a half, there was a relative lull in the violence. But at the end of July, the pace picked up once more. The attacks were inspired, human rights activists said, by a near-constant stream of vitriol from Islamic leaders calling for retribution against the Copts.

Members of the Muslim Brotherhood on Aug. 2 distributed flyer threatening to attack church buildings and police stations in Minya in Upper Egypt, according to local residents. Muslim Brotherhood leaders have stated that the attacks against the Christians will not stop until Morsi has returned to power. The new wave of attacks has included drive-by-shootings, kidnappings, attacks on church buildings and Christian-owned property and now two lethal shootings.

On the same day Jessica was killed, masked gunmen burst into a grocery store in Jazeerat Al Khazendara village in Souhag and attacked a Coptic Christian family according to the rights activists. During the kidnapping attempt, Milad Ebeed was abducted and his father, mother and brother were all shot. His father, Sadek Ebeed, 75, died at the store. The others sustained serious, but not life-threatening wounds.

Milad Ebeed was later released after a ransom was paid, the rights activists said.

Along with the shootings, the towns of Minya and Assuit have been the sites of repeated attacks against Christians, which make up about 10 percent of Egypt’s predominantly Sunni Muslim population. For the past two weeks, unidentified vandals have painted graffiti on church buildings and Christian-owned homes and businesses in Assuit declaring, “Egypt is Muslim, not Christian.”

At the same time, Islamists have been roaming Christian areas of Assuit handing out anti-Christian flyers and intimidating any Coptic business owner who keeps his store open, rights activists said.

On Saturday (Aug. 3), roughly 20 people were injured and five Coptic-owned homes were destroyed along with several Coptic-owned businesses in the village of Al-Sharqiya in Minya Governorate when a political dispute at a Coptic-owned café turned ugly. A fight that started over changing the channel from a news program quickly led to Islamist mobs rampaging through the village with clubs, swords and Molotov cocktails, according to human rights activists.

Mina Thabet, spokesman of the Maspero Students Union, said things could get worse in Minya.

“For the past few days, we have had many instances of attacks against Copts,” Thabet said. “Threats are widespread. In the Minya Governorate, I think it will be hard for the next few days.”

In a statement released Wednesday (Aug. 7), the Egyptian Initiative for Personal Rights and 15 other human rights organizations condemned Islamist incitement to violence and the government’s lack of will to stop it.

“These organizations strongly condemn the rhetoric employed by leaders of the Muslim Brotherhood and their allies, which includes clear incitement to violence and religious hatred in order to achieve political gains, regardless of the grave repercussions of such rhetoric for peace in Egypt,” the statement read.

The statement further denounced negligence of the state to protect Christians, to confront sectarian attacks and to hold assailants in several governorates responsible.

“This negligence reveals that the pattern of impunity which spread during the Mubarak era and remained in place throughout the rule of the Muslim Brotherhood continues to this day, even after both of these regimes were overthrown,” the organizations stated.

Zakara said that, strangely, Jessica, an only child, was concerned about the violence and seemed to have a premonition of her death. She watched protests on television and urged her parents to get involved, but at the same time she was afraid enough for her safety that she asked her Sunday school teacher to escort her home from Bible school.

“She said she didn’t feel safe,” Zakaria said. “She asked her mother and father, ‘What if I am at a protest and I got shot in the chest? What would happen to me?’”