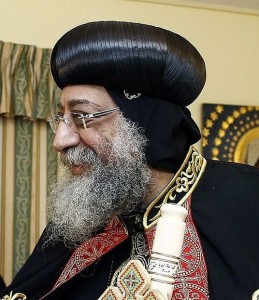 (JNS.org) The head of Egypt’s Coptic church, Pope Tawadros II, urged the Egyptian people to prevent bloodshed and violence in the face of growing sectarian violence.

“I call on everybody, with my utmost love, to protect the lives of Egyptians,” Pope Tawadros said on his official Twitter account, according to a translation by AllAfrica.com.

“I ask all Egyptians to use their heads wisely, practice self-restraint and avoid any violence, attacks or recklessness against humanity or property,” Pope Tawadros added.

Pope Tawadros played an unprecedented role in the Egyptian military’s ouster of former Islamist President Mohamed Morsi. But in the weeks following the ouster, violence against Egypt Coptic Christians has dramatically increased. Several Coptic Christians have been murdered and injured in attacks. Tawadros has canceled his weekly prayer sessions and other public events out of fear for his safety.