Source: The National
Lindsay Carroll | 14 May 2014
ABU DHABI // The Coptic Pope thanked the President, Sheikh Khalifa, and UAE leaders for supporting stability in Egypt, at the end of a five-day visit to six of the emirates. 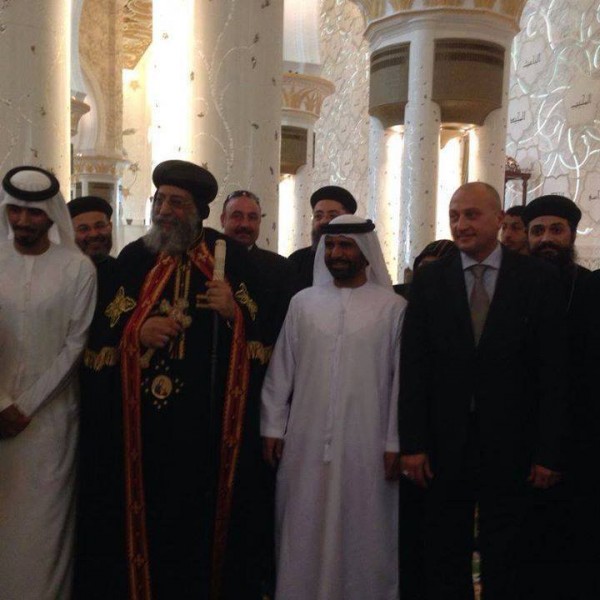 “The rulers support the Egyptian government in many ways, and this has helped Egypt to be better after the revolution of June 30 last year,” said Pope Tawadros II, leader of the Coptic Orthodox Church of Alexandria.

This included financial support, the building of schools and clinics and investment projects in industry and agriculture, he said.

The pope also discussed building understanding between religions in Egypt and urged Egyptians to vote in this month’s presidential election.

“We will find a new expression for the right relations between Muslims and Christians, and I hope that many problems will be solved and all Egyptians will enjoy safety and justice,” Pope Tawadros said.

The two religious communities could build on a long history of cooperation between the Coptic church and Al Azhar, the seat of Sunni Islamic learning in Cairo. “From time to time, some problems may take place, but we try to solve the problems,” he said.

The pope also discussed the effect on Christians of instability in Iraq and Syria. “The Church in Syria has faced quite a few problems, including but not limited to the abductions of the nuns in Maaloula and raids on churches,” he said, and the solution now lay in agreement among “external parties”.

Syrian rebels thought to be from the Al Qaeda-affiliated Jabhat Al Nusra abducted the group of Greek Orthodox nuns from their convent and held them for three months, until they were freed this month as part of a prisoner exchange.

Pope Tawadros met UAE officials and visited members of the Coptic community here after arriving in Abu Dhabi on Friday, when he toured the Sheikh Zayed Grand Mosque.

He met with the rulers of Abu Dhabi, Dubai, Sharjah, Ajman, Ras Al Khaimah and Umm Al Qaiwain on his visit, which also included a sermon at St Antony Coptic Orthodox Church in Al Mushrif and a lecture at Al Raha Beach.

The Coptic church has more than 12 million members, most of whom are in Egypt, where Copts are the largest minority. Pope Tawadros was enthroned in November 2012 after the death of his predecessor, Pope Shenouda III, the previous March.

There is a Coptic church in each emirate, and two in Abu Dhabi. This and the invitation from UAE rulers to Pope Tawadros shows the good relations between the two countries, Mr Lamei said. His predecessor, Pope Shenouda III, had come to Abu Dhabi to open St Antony Cathedral in the capital.

Loryan Bassily, 24, a planning engineer and member of the Coptic community, was excited to see Pope Tawadros.

“We are very pleased for the pope to come here. This is the first Arabian country he has visited,” she said.

She described the UAE, where she has lived since she was 4, as a “land of freedom” but is still worried about Christians in Egypt amid unrest in the country.

She didn’t realise how many Copts lived in the UAE until she attended the event at Al Raha Beach.

“Then I really knew how many there are,” she said.

Most viewed articles
A Great Time to Join the Orthodox Church208
New Jersey Governor Signs Bill Legalizing Abortion Up To Moment of Birth107
The Way of Christ Is The Way of Love75
Metropolitan Hilarion Celebrates the 20th Anniversary of His Episcopal Consecration59
Brooklyn Street Co-Named for Antiochian Pastor Who Served a Half Century There53
Metropolitan Hilarion: the Church and traditional confessions have done everything possible to improve the situation in Kazakhstan49
My World’s Different11
4-400×6001
The Apostles’ Fast and Theology1
1
Most popular authors
Frederica Matthewes-Green208
Pravmir.com team108
Ryan Foley107
Fr. Theodore Stylianopoulos75
Peter Samore53
Protopresbyter Themistoklis Mourtzanos11