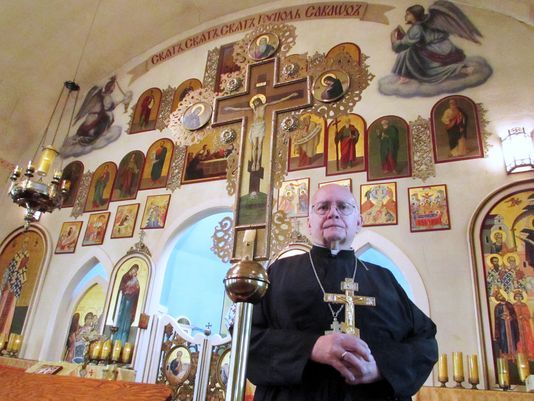 CORNING –A small church that has served Eastern European immigrants and their descendants in the Corning area since the early 1900s is celebrating its 100th birthday soon, and the public is invited.

St. Mary’s Orthodox Church on Sunset Drive in Corning was founded in 1914 by immigrants from the Carpatho-Russian Mountain region, in what is now Slovakia and the Czech Republic.

Today, about 50 or so regular church-goers climb the steep stairs to attend services in the church building that was erected in 1917.

“I get calls for the other church. One Saturday a wedding party came in looking for the bride and groom,” Mahler said. “I said ‘I think you’ve got the wrong church.’ I offered to marry them.”

St. Mary’s Orthodox Church is aligned with the American Carpatho-Russian Orthodox Diocese of the U.S.A., based in Johnstown, Pa.

Bishop Gregory of Nyssa, primate of the American Carpatho-Russian Orthodox Diocese, will be a special guest at a 100th anniversary celebration Oct. 12. Former pastors of the parish will also take part in the observance, which is open to the public.

In addition to celebrating its centennial, St. Mary’s Orthodox Church is also looking for a new home.

The current church on Sunset Drive sits on a steep hill, requiring worshipers, many of them elderly, to ascend a difficult stairway.

The church has been saving money for a move and is now looking for a suitable new home, Mahler said.

“We’re planning on relocating. This building is (nearly) 100 years old. It needs work,” he said. “It’s time to move on. There is no off-street parking, and steep stairs. It makes it difficult. It’s a long-term project. We’ve been holding fundraisers. Now it’s time to find a piece of property.”

There is a lot of history and nostalgia in the existing building, and the congregation doesn’t plan on leaving it all behind.

“We have people who had grandparents here in the early 1900s. Some are reluctant to move,” Mahler said. “There are a lot of memories here. When we move, the stained glass windows will come with us to the new building. Icons will go with us, pews, the center table will all go. We’ll be blending the old with the new, the past with the present.”

Most viewed articles
The Truth About Riches177
The Muskox Response To COVID-19131
Metropolitan Onuphry Speaks on How to Protect One’s Soul From Sin102
Patriarch Porfirije Thanks the Russian Church for Participation in Restoring Serbian Churches97
Do We Act Differently Than Others?66
March for Life participants optimistic for a post-Roe America: ‘This is just the beginning’54
Most millennials, Gen Z adults support bans on abortions when baby’s heartbeat is detected: poll49
Strong Orthodox Presence at the 2022 March for Life47
Sunday of the Samaritan Woman2
Most popular authors
Pravmir.com team295
Fr. Gabriel Bilas177
Archpriest Michael Gillis131
Priest Luke A. Veronis65
Ryan Foley54
Maria Trushanina1