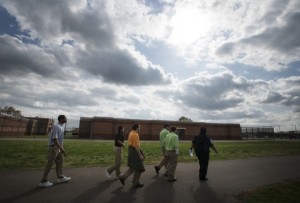 When another inmate was hassling Justice Green recently, Green didn’t hit him. Instead, he tossed him the 19th-century Russian literature story he was reading at the time and said: Come back to me in a week after you’ve read this.

Something strange is happening at Beaumont Juvenile Correctional Center. Residents are so eager to get into a Russian literature class led by the University of Virginia that prison officials use it as a reward. The youths are clamoring to read weighty books such as “War and Peace” even after the class is over. And someone like Green, an 18-year-old from Northern Virginia who said he’s there “for grand theft autos,” knew he could walk away from a fight certain he had won.

The idea of bringing Tolstoy to juvenile offenders is flat ridiculous to some, who think they need a tough wake-up call and practical job skills, not what they consider literary fluff.

But the commonwealth spends nearly $80 million a year on juvenile correctional centers, and in recent years more than a third of the people released from those centers were convicted of another crime within a year.

No one’s predicting a miracle cure for recidivism, a national problem. But there’s no cost to the Department of Juvenile Justice for the class. And staff members at Beaumont see a marked change in students’ behavior and goals with the class, said Michael Hall, the principal of the high school there. Some have gone on to college.

Researchers have documented positive changes in behavior, decision-making, social skills, educational goals and civic engagement, according to a study by U-Va.’s Curry School of Education. The study also points to benefits for the undergraduates who study alongside incarcerated youths.

The demand for the service-learning class, the response and the impact it seems to have prompted U-Va. to give Andy Kaufman, a lecturer and fellow at the university, a $50,000 grant to expand his experiment. He hopes to bring classics of Russian literature to more U-Va. students, more people at Beaumont, and more inmates at other prisons in Virginia and nationwide.

Beaumont residents said privately that the course had a profound effect on them. Jonis Romero, just released back home to Woodbridge, said that since taking the class, he thinks constantly about how he wants to live his life. He got a job at a carwash right away and hopes to go to George Mason University. Alex Espinoza, an 18-year-old from Arlington County, said it “helped me acknowledge the little things, not worry about greedy things.”

One inmate told researchers that for the 90 minutes of class each week, he felt like a human being again. “When they leave Beaumont,” lead research assistant Rob Wolman said, “do we want them feeling like human beings or feeling like criminals?”

Kaufman’s first time in a prison found him, in his Jos. A. Bank suit and penny loafers, getting stared down by 15 men in orange jumpsuits. An expert on Tolstoy, he had been invited to a men’s prison as part of a community book festival. He had always thought the humanities could have real relevance to people’s lives.

He quickly discarded the notes he had prepared on “The Death of Ivan Ilyich,” sensing that the men didn’t want to hear an academic lecture. Instead, he just asked, “What did reading this story mean to you guys?”

For the next hour and a half, the inmates told him about their experiences with death, people they have watched die, mistakes they have made. “It was one of the most powerful classroom experiences I had ever had,” he said.

So he created “Books Behind Bars,” a course that he hopes will shake up his students in the same way, challenge them to learn the literature so well that they can help juvenile offenders relate to it, see the stories in a completely new light and perhaps have a positive impact on some criminals.

There’s so much demand for the class that U-Va. students have to apply, and nearly three-quarters are turned away.

In the past decade or so, there have been a growing number of classes across the country taught by professors jointly to students and inmates, many led by Temple University’s Inside-Out Prison Exchange Program. Inside-Out covers a variety of subjects and doesn’t have the students leading and joining almost one-to-one discussions, as Kaufman’s does.

Kaufman thinks Russian literature is — unexpectedly — a particularly good fit for prisoners. The authors often asked what they called “the accursed questions,” Kaufman said: “Who am I? Why am I here? Given I’m going to die, how should I live?”

‘Honest all they want’

Inside the razor wire on a hillside in rural Virginia, beyond the metal detectors and the locked doors, 18 Beaumont inmates were sitting at small tables with U-Va. students on a recent afternoon. They had read the short story “An Honest Thief.”

They listened closely as Kaufman told them about Feodor Dostoevsky and the writer’s fascination with criminals. When he was 18, his father was slain by some of his peasants. He was arrested for political reasons and sentenced to execution. “The guns were trained on him,” Kaufman said, “and at the last minute, the czar sent in guards and said, ‘We changed our minds, we’re just going send you to prison camp in Siberia for eight years.’ ”

Justice Green leaned back in his chair in surprise.

“He got to know all kinds of people — rapists, murderers,” Kaufman went on. And after his years in prison, “Dostoevsky would say, yes there is evil, there is evil inside every one of us, and we have the capacity to choose between good and evil.”

A couple of inmates nodded.

The U-Va. students, who had been going to formal dances the week before, playing squash and writing papers in the library, then led small discussions about morality, honesty, addiction, desperation, poverty, charity and forgiveness. At each table, groups of four or five people were arguing and laughing.

The students knew some of the crimes that had brought the men there: driving a getaway car after a fast-food-chain holdup, drugs.

Some they didn’t know. One of the young men — one who seemed deeply troubled by the moral questions, the ideas of confession and living up to God’s teaching — had been convicted of raping an 8-year-old girl.

At one table, freshman Russell Bogue asked whether they thought there were thieves and honest thieves.

“I don’t see where that matters, because they’re still a thief,” said Quedell Higgs, 18, from Chesapeake. “They can be honest all they want to about it.”

A Beaumont resident said it mattered that the homeless man in the story repented over stealing from his benefactor and confessed.

They talked about whether they thought if they themselves were honest criminals.

Maybe it was the chance to talk with people their own age that got them thinking; maybe it was the tough questions; maybe they were grateful to be challenged. Beaumont has a high school for the 250 residents, ages 16 to 21, who arrive at different levels of education and ability. Green had finished all his high-school requirements, so now he is learning about electricity, masonry and commercial cleaning; he said he would rather be taking classes that would help him in college.

A couple of inmates left the class this spring. But all those who have remained talked about the questions staying with them. Some said they learned to have hope, or to redefine success, or to think more carefully.

“Last night, I was sitting on my bed and it all of a sudden hit me: How am I going to be remembered?” Green said. “I sat there for an hour, just looking at my leg, thinking about how I would answer that.”