Cross of St Andrew the Apostle Arrives in Russia 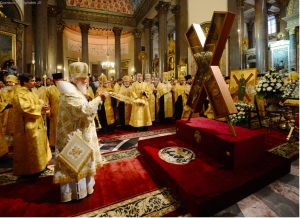 The shrine with the Cross of St Andrew the First-Called has arrived in St Petersburg.

The relic has opened the festivities marking the 1025th anniversary of the Baptism of Rus due to take place on the territory of three states – Russia, Ukraine and Belarus.

“The arrival of the relic is the great event and howling joy for all St Petersburg residents who are attracted to the fate of the country,” St Petersburg Governor Georgy Poltavchenko told journalists on Thursday. Head of the St Andrew First-Called Foundation Vladimir Yakunin said the veneration of St Andrew the Apostle, the memory of his mission and the arrival of the Cross, on which the Apostle was martyrised, “is the fact of sacrifice and the hope of that our cultural and spiritual traditions prevail”.

Head of the Greek delegation, Metropolitan Chrysostomos of Patras, Greece said: “It is of great honour to be on the Russian land by giving you the most valuable thing that it has.” “The mission of St Andrew the Apostle, who founded the Christian community in Byzantine, unites the Orthodox Churches of Russia and Greece,” the metropolitan told Itar-Tass.

After the prayer service at the airport the Cross was delivered to the Kazan Cathedral where Patriarch Kirill of Moscow and All Russia met the relic. The St Andrew Cross will stay in St Petersburg till July 15 and the Kazan Cathedral will be opened from 7 a.m. to 10 p.m. Moscow time.

The Cross will be brought to Moscow on July 16-26. While leaving Russia the Cross will stay in Kiev. The relic’s stay coincides with the festivities marking the Day of Baptism of Rus with the participation of Local Orthodox Churches. The relic can be blessed in Minsk from July 29 to August 2.

Most viewed articles
COVID Directives From His Eminence Metropolitan JOSEPH211
The Wrath of God According to St. John Chrysostom168
Moses and the Ten Words147
New Film about Orthodox Christian Vision on Climate Change130
In Church and at Home: Liturgical Resources for Great Lent89
Why We Pray For The Dead71
Metropolitan Joseph Meets with Metropolitan Tikhon of the Orthodox Church in America32
Georgian PM condemns “unprecedented attack” against Patriarch Ilia and the Orthodox Church27
Radical-liberal view on human rights is not the sole possible opinion1
How Will We Be Judged?1
Most popular authors
Archbishop Joseph of New York and Metropolitan of All North America211
Archpriest Michael Gillis168
Pravmir.com team162
Archpriest Lawrence Farley147
Peter Samore89
Priest Luke A. Veronis71
Aurelian Iftimiu27
Fr. James Guirguis1