The memorial cross has been vandalized in the place outside Yekaterinburg, where the remains of Russian Tsar Nicholas II's children, Alexey and Maria, were discovered, said Archaeologist Sergey Pogorelov.
admin | 26 June 2012 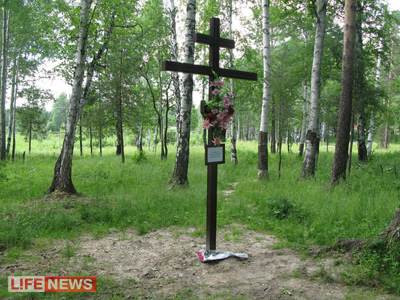 Yekaterinburg, June 25, Interfax – The memorial cross has been vandalized in the place outside Yekaterinburg, where the remains of Russian Tsar Nicholas II’s children, Alexey and Maria, were discovered, said Archaeologist Sergey Pogorelov.

“My colleagues visited the place yesterday, examined the surrounding territory and found the cross in the shrubs nearby. The cross had been pulled out, removed and thrown away,” Pogorelov, a researcher at the regional center for the protection of historical and cultural heritage, told Interfax on Monday.

“It is an outrageous act of hooliganism, or a provocation,” the archaeologist said.

After the royal family was executed at Ipatyev House in Yekaterinburg in 1918, the bodies were moved to an abandoned mine, Ganina Yama, not far from the city and thrown into a well. The well was not deep enough to hide the bodies, so they were lifted to be moved to another place.

As the convoy was moving it got stuck in a marshy area, called Porosyonkov Log, where the Bolsheviks dug a pit, and dumped the bodies into it after pouring sulfuric acid onto them. Nine of the 12 bodies were buried in the same place, and the two others, those of Crown Prince Alexey and his sister Maria, were buried separately in a forest.

The first remains were discovered back in 1978, but excavation work had not been done until 1991. Alexey’s and Maria’s remains were found much later, in 2007. All bones were put through numerous laboratory tests, historical, archaeological and archive studies have been conducted, and anthropologists, dentists and genetics scientists examined them, which led to the conclusion that the remains found were those of members of the royal family.