Culture Shock and the Orthodox Church

When I was first introduced to the church, and began going regularly, it was just like visiting a foreign country – everything was new and beautiful and exciting, and the sights, sounds and smells were enticing. I was constantly devouring the new experiences with gusto, and drinking in as much information as I could. I was so caught up in my new-found faith that I did not want to think about what it might mean later.
| 24 December 2009

When you move to a new country you experience a strange phenomenon known as “Culture shock.” Everyone has experienced this, to some degree, when they move to a new city, change careers, or anytime something big in your life changes. It is never as intense, however, as when moving to a new country, where language and culture are profoundly different than what you are used to.

Being former Protestant missionaries to the small country of Estonia, Clint and I know this phenomenon all too well. What is strange about it is that when we were actually living through it, we did not realize it. In fact, most of the time, we were in complete denial. It was not until much later, when we were home in America, reminiscing, that we could look back and see it.

The first phase of culture shock is Excitement, also known as “The Honeymoon Period” and it is just what it sounds like. For the first few weeks after we moved to Estonia everything was like one big vacation. We enjoyed sight-seeing, and eating out, and getting to know our new home country. Everything was new and different and exciting.

However, that quickly changed once we had to actually start living it, and we had to do things like find a home, grocery shop, or get car insurance. All of a sudden, “normal” everyday things suddenly became stressful and confusing—people were acting in unpredictable ways, the culture felt strange. We could not read anything, or communicate effectively. Because of this we started to withdraw, and began disliking the things that just a few months ago seemed exciting. For us, that usually meant getting a babysitter, going to our favorite Chinese Food restaurant and sitting around with our fellow missionaries “criticizing” all the dumb things about Estonia.

During this time you are also experiencing something else—homesickness. Even though Clint and I were used to not living near family, homesickness still occurred. But it is not just people we missed, it was everything from home—people, places, food – that we longed for. We were also completely helpless to do anything about it. We could not just hop on a plane whenever we wanted to, and we could not call on the phone very often because it was so expensive. Thankfully we did have email, but even that did not relieve our homesickness. You just feel so lonely, and after awhile that turns into anger, and sometimes even depression.

The thing is, we still did not realize it as being part of culture shock. Even when I would go completely ballistic over little things like the fact that they had never heard of cheddar cheese, or fried chicken, or customer service, or that we had to pay to use the bathroom at McDonald’s, we still did not see it. We honestly thought that our new “home” was a completely stupid and “backward” place. Estonia was the problem, not us. 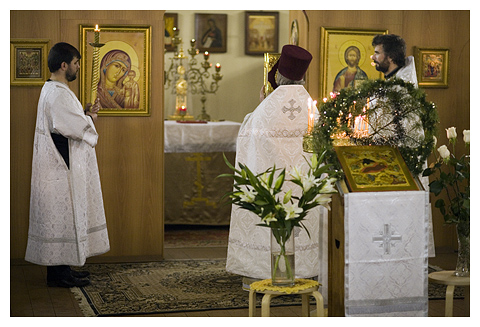 This feeling can go on for years, until one of two things happens. Either you eventually get over it and realize that this foreign place is just different than home, and even learn to appreciate the new and different culture, or you can remedy the situation by abandoning everything, packing up, and going home.

So, you might ask, why all this talk of “culture shock?” Well, I will tell you. It is because I am experiencing it all over again. Our conversion to Orthodoxy is just as unfamiliar a land, as Estonia ever was, and it is having the same effect. The great thing about hindsight is that it becomes easier to recognize the signs so hopefully we can handle it better.

When I was first introduced to the church, and began going regularly, it was just like visiting a foreign country – everything was new and beautiful and exciting, and the sights, sounds and smells were enticing. I was constantly devouring the new experiences with gusto, and drinking in as much information as I could. I was so caught up in my new-found faith that I did not want to think about what it might mean later.

Now that we have settled into the routines of the church, I now find that I am homesick. Don’t get me wrong, I am not thinking of leaving the church—I am not homesick for Protestantism, but for my friends and family. Growing up, attending church was always a HUGE part of our family life. Everyone, including aunts, uncles and cousins are all part of the same church, and anytime we would get together, church was usually part of it. I have always thought that it was this unity that made our family so close-knit. Even though most of the year we lived in different cities, and went to different congregations, we still were unified in our beliefs.

Right now we are the only ones to come home to Orthodoxy, and I miss my friends and family terribly. I find that each Sunday I come to Liturgy without them that I become more and more saddened by the fact that they are not with us. I pray to God every night that through our examples our families will one day come to the church, but I also have to deal with the fact that that may never happen. I am thankful for the wonderful caring people in our Parish who love us, and try to make us feel at home, but it is still not the same.

Christmas is especially hard right now, because we feel ripped in two, wanting to be in two places at once. What should be a time of joy and celebration is now a time of frustration and heartache because we now have to choose – something we never had to do before. We know how important it is to be at the Divine Service on Christmas morning, but choosing between church and family is not as simple as it seems. We simply do not live close enough to do both. So, we either go to Liturgy and reject family, or spend it with family and miss out on church – neither sounds very appealing.

So, what do new converts do? Just like culture shock, it can end two ways. Either they eventually come to terms with their new arrangement and settle in, or they find the constant stress to be too much and give up and leave. For us, the latter is simply not an option. I honestly do not know what would have happened to us in Estonia, since we ended up coming home before we could find out, but Orthodoxy is not something we could turn our backs on. However, I do not want to live in a constant state of stress and confusion either. I pray that I will eventually feel completely at home in the Orthodox Church, and that either my family will come to know it too, or the heartache I feel will be easier to bear.