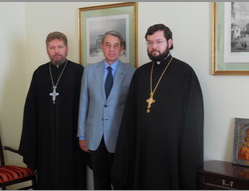 On October 18, 2013, deans of the Moscow Patriarchate parishes in Rome, Archpriest Vyacheslav Bachin and Archimandrite Antony (Sevryuk) met with the Russian Ambassador to the Vatican, Mr. A. Avdeyev.

They discussed the cooperation between the Russian Church’s community in Rome and the Russian mission to the Holy See. In particular, they considered the holding of a memorial event devoted to Archpriest Mikhail Osorgin, who had been rector of the Parish of St. Nicholas in Rome for many years. On November 24, it will be a year since the death of this outstanding pastor whose name is written in golden letters in the history of the Russian Orthodox Church in Italy, the website of the church of St. Catherine in Rome reports.