DECR chairman meets with Ambassador of Guatemala to Russia 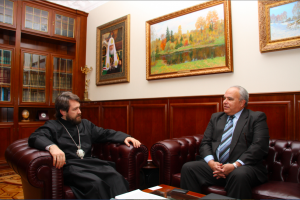 On 24 October 2013, Metropolitan Hilarion of Volokolamsk, chairman of the Moscow Patriarchate’s Department for External Church Relations, met with H.E. Herbert Estuardo Meneses Coronado, Ambassador Extraordinary and Plenipotentiary of Guatemala to Russia. They were joined in the meeting by Miguel Palacio, staff member of the DECR secretariat for far abroad countries.

Metropolitan Hilarion greeted the high-ranking diplomat and told him about the Russian-speaking diaspora in Guatemala, noting an important part played by the Trinity convent of the Antiochian Patriarchate in spiritual care for the compatriots and in consolidating positions of Orthodoxy in Guatemala.

Ambassador Coronado expressed interest to the development of cooperation with the Russian Orthodox Church.

Also discussed were relations between Guatemala and Russia.