On 27 August 2013, with the blessing of His Holiness Patriarch Kirill of Moscow and All Russia and at the invitation of Metropolitan Ioann of Zagreb and Ljubljana, Metropolitan Hilarion of Volokolamsk, chairman of the Moscow Patriarchate’s Department for External Church Relations, arrived in Croatia for a two-day visit.

Accompanying Metropolitan Hilarion are Bishop Antonije of Moravicí, representative of the Patriarch of Serbia to the Patriarch of Moscow and All Russia; hieromonk Ioann (Kopeikin), assistant to the rector of the Ss Cyril and Methodius Theological Institute for Post-Graduate and Doctoral Studies; and DECR staff members, Mr. Andrey Khoshev and Mr. Alexander Yershov. 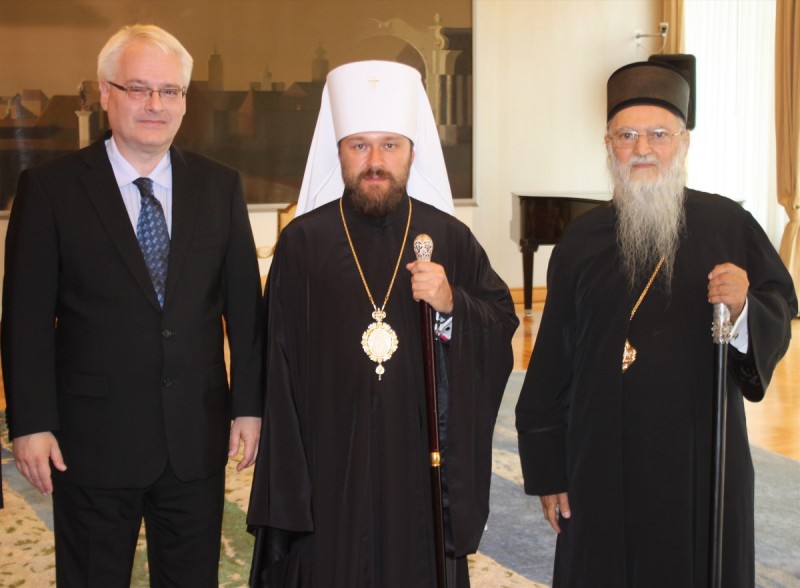 Mr. Josipović warmly greeted the high guest and expressed his joy over Metropolitan Hilarion’s visit to Zagreb. The participants in the meeting noted the important role of the Orthodoxy in the history of Croatia and the outstanding contribution that the Serbian people made to the culture of the country.

The President of Croatia told about the Government’s religious policy and the work it has been carrying out to create favourable conditions for the return of the Serbian population which left the country during the armed conflict in 1991-1995.

Present at the meeting were Metropolitan Ioann of Zagreb and Ljubljana; Bishop Antonije of Moravici; H.E. Mr. Robert Markaryan, Ambassador Extraordinary and Plenipotentiary of the Russian Federation to the Republic of Croatia; Mr. Dmitry Malyshev, counselor to the chairman of the Board of Directors of the “Russian Grids” JSC; Mr. Andrey Khoshev, a staff member of the DECR secretariat for inter-Orthodox relations; Ms. Arnica Marinović, counselor to the President of Croatia on science, higher education and religious associations; and Ms. K. Lahorski, counselor to the President on foreign affairs.