DECR Chairman Receives a Pilgrims Group from the Church of England

On September 6, 2012, Metropolitan Hilarion of Volokolamsk, chairman of the Department for External Church Relations, received a group of pilgrims from the Church of England led by Bishop Robert Ladds, Honorary Assistant Bishop in London and Superior-General of the Society of Mary.

In the beginning of the meeting, His Eminence Hilarion warmly greeted the guests and introduced them to the major areas in which the Department for External Church Relations works. 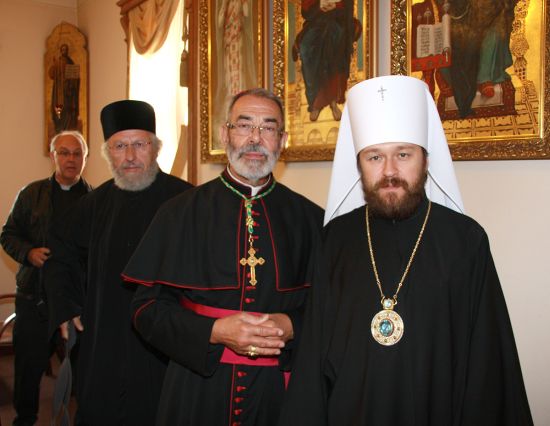 In his response, Bishop Ladds thanked Metropolitan Hilarion for his firm stance in face of the challenges of the modern world, set forth, in particular, in his address to the Nicean Club in September 2010. He described that address as weighty and precise words and said that many of his people were glad to hear so clear an exposition of the teaching of the Church. Metropolitan Hilarion presented to the club members, he said, a grave reality and a lethal threat to the fraternal dialogue between churches coming from the rampant liberalization of Christian values. Metropolitan Hilarion, he continued, opposed this pernicious development by the power and beauty of common witness, to which the Church was called from the beginning, the preaching of the Gospel…, and the undistorted teaching of the Lord Jesus Christ under the guidance of the Holy Spirit as revealed in Holy Scriptures and the Holy Tradition.

Metropolitan Hilarion, in his turn, stated that the Russian Orthodox Church watched with regret the liberalization of the doctrine and morals in the Church of England, which complicates dialogue between the Orthodox and the Anglicans. In particular, the female priesthood and female episcopate introduced in the Church of England have actually closed the opportunity for further discussion on the recognition of the apostolic continuity a valid in the Anglican Church. In addition, a great concern has been caused by the exclusion from active church life of Anglican bishops, priests and laity who seek to follow in everything the teaching of the Gospel and traditions of the Early Church.

In conclusion of the meeting, Metropolitan Hilarion answered questions from the guests about today’s life of the Russian Orthodox Church.