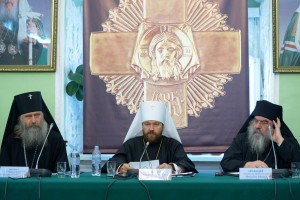 Archbishop Feognost conveyed to the participants a blessing from His Holiness Patriarch Kirill of Moscow and All Russia and called on them to hold a frank discussion on topical issues in order to “elaborate common principles for overcoming difficulties which monasteries and monastics are now facing in their life.” One of the major topics of the conference, according to Archbishop Feognost, is a discussion on the draft Statute of Monasteries and Monasticism. The Commission of the Inter-Council Presence, the Synodal Department for Monasteries and Monasticism, as well as fathers and mothers superior of Stavropegic monasteries and convents have been working on this document for three years.

Metropolitan Hilarion of Volokolasmk addressed the meeting on Monasticism as a Mystery of the Church and answered questions from participants.

Speaking at the two-day forum will be archpastors, abbots and monks from various countries. At the conclusion, the participants will hold a general discussion and adopt a final document.

Most viewed articles
The Trap of Religiosity113
Patriarch Daniel explains why the Hesychasts were the most sought-after spiritual fathers and what is a prayerful reason102
Bishop Nicholas of Manhattan visits Holy Cross Monastery in West Virginia84
Lord, Save Me!74
Why Everything Is Important (but not the stuff you might imagine)69
Condolences of Patriarch Kirill over the death of believers in the fire that broke out in Abu-Seifein Church in Cairo45
25 Years of Help: the Ship-Church Goes On its 25th Voyage to Distant Villages44
St. Tikhon Church to host Liturgical Music Symposium in October 202241
Ukrainian Church Celebrates Metropolitan Onuphry’s 8th Anniversary of His Enthronement21
Most popular authors
Pravmir.com team235
Vasileios Stoyiannos113
Aurelian Iftimiu102
Fr. Theodore Stylianopoulos74
Archpriest Stephen Freeman69