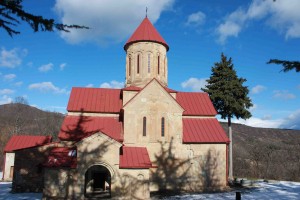 On 14 January 2013, Metropolitan Hilarion of Volokolamsk, chairman of the Moscow Patriarchate’s Department for External Church Relations, who is on a visit to Georgia on the occasion of the jubilee of the Primate of the Georgian Orthodox Church, visited the Betania Monastery of the Nativity of the Mother of God, the place of monastic deeds and the burial place of Sts John (Maisuradze) and George (Mkheidze). Accompanying the delegation of the Russian Orthodox Church in this trip was Metropolitan Andrew of Samtavisi and Gori. Archimandrite Yakov, abbot of the monastery, warmly welcomed Metropolitan Hilarion. The DECR chairman venerated the shrines of the monastery which he first visited when he was fifteen.

Metropolitan Hilarion greeted all those present and told them about his visits to the Church of St Alexander Nevsky and meetings with Metropolitan Zinovy (Mazhuga), in schema Seraphim. He continued:

“I would like to convey to you the blessing of His Holiness Patriarch Kirill who visited Tbilisi and this holy church on numerous occasions. I have come here with his blessing and at the invitation of His Holiness and Beatitude Catholicos-Patriarch Iliya II who is celebrating his eightieth birthday and the thirty-fifth anniversary of his enthronement. I am happy to visit this church in which the divine services are celebrated in the Church Slavonic language. The Orthodox Russian-speaking faithful can come here to pray, light candles and, most importantly, receive the Holy Communion, thus being united with God.

The Church of St Alexander Nevsky is very memorable to me. I first came here thirty years ago, when I was fifteen, and had a happy opportunity to meet with His Eminence Metropolitan Zinovy, rector of this church, whom you deeply venerate. He is venerated not only in the Georgian Church, but in the Russian Church too, because he was a remarkable man who combined his archpastoral service with the ministry of an elder. He was an elder and a spiritual counselor. We remember him as a radiant and good shepherd who lived in the likeness of angels, in austerity and humility. I do hope that the Georgian Church will canonize Metropolitan Zinovy who had served her all his life.”

That same day, Metropolitan Hilarion visited the Bodbe Convent of St Nino the Enlightener of Georgia, where he was warmly welcomed by hegumenness Feodora and sisters and venerated the main shrine of the Convent – the tomb of St Nino. Accompanying the DECR chairman were Metropolitan Andrew of Samtavisi and Gori and Metropolitan Seraphim of Borzhomi and Bakuriani.

On January 15, Metropolitan Hilarion, at the request of hegumenness Feodora, delivered a lecture to the sisters of the convent on topical issues of church life.