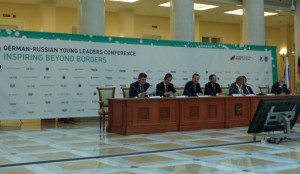 On 12-15 September 2013, the 5th Russian-German Young Leaders Conference took place in St. Petersburg, at the Boris Yeltsin Presidential Library and the Constantine Palace in Strelna, and gathered together over three hundred representatives of the two countries, aged 25-35, working in economics, politics, science, culture, public sphere and the mass media. The conference held annually in Russia and Germany is aimed at uniting future leaders of both countries.

The conference is organized by the association ‘Germany-Russia: New Generation’ and the St. Petersburg State University of Economics. Among the partners of the forum are the Committee for External Relations of the Government of St. Petersburg, A.M. Gorchakov Public Diplomacy Support Foundation; the Musical Olympus Foundation, as well as the Konrad Adenauer Foundation and the Friedrich Naumann Foundation for Freedom.

Representing the Moscow Patriarchate’s Department for External Church Relations at the conference was hierodeacon Roman (Kiselev), a staff member of the DECR secretariat for far-abroad countries.

Before the official opening of the conference, the German delegation led by Duke Christoph of Oldenburg, chairman of the 5th Russian-German Young Leaders Conference, laid wreaths at the monument to the victims of the siege of Leningrad at the Piskarevskoye Memorial Cemetery.

Mr. Sergey Naryshkin, chairman of the State Duma of the Federal Assembly of the Russian Federation, sent a message of greetings to the participants and guests of the conference.

Mr. Sergey Lavrov, Minister of Foreign Affairs of the Russian Federation, addressed all those present, saying in particular, “Your meeting is an obvious example of multidimensional cooperation between Russia and Germany, with young people of both countries taking an active part in it. It is gratifying that the Russian and German young people are committed to strengthening mutually enriching relations, to broadening inter-cultural dialogue, promoting atmosphere of friendship and mutual understanding between our countries and people. I am convinced that the forum will make its contribution to the joint work aimed at consistently fulfilling the considerable potential of the strategic partnership between Russia and Germany in various fields.”

The 6th Russian-German Young Leaders Conference will take place in Hamburg in 2014. Within the framework of the next conference, it is planned to organize a section taking part in which will be young representatives of traditional Christian confessions from Russia and Germany.