Delegation of Russian Church completes its pilgrimage to Mount Athos 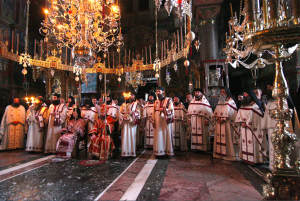 The delegation of the Russian Orthodox Church, sent by the Holy Synod to take part in the celebrations on the occasion of the patronal feast of the Russian Monastery of St Panteleimon, completed its pilgrimage to the Holy Mountain.

On 11 August, Metropolitan Rostislav of Tomsk and Asino, head of the delegation, officiated at the Divine Liturgy in the Vatopedi Monastery. Concelebrating with him were Bishop Veniamin of Borisovka, the brethren of the monastery and Russian ordained pilgrims.

After the service, the guests were invited to the repast. Then Russian pilgrims visited the museum of the Vatopedi Monastery.

The delegation visited the Dochiariou Monastery where Russian pilgrims venerated the wonder-working icon of the Mother of God, called “She Who is Quick to Hearken”, and completed its pilgrimage at the Xenophontos Monastery, one of the oldest abodes on Mount Athos. His Grace Bishop Veniamin of Borisovka celebrated the Divine Liturgy at the Xenophontos Monastery. Concelebrating with him were the brethren and ordained pilgrims.