On 29 July 2012, a delegation of the Bulgarian Orthodox Church arrived in Ukraine to take part in the celebration of the 20th anniversary of His Beatitude Metropolitan Vladimir’s tenure of office. The delegation visited the Monastery of the Entrance into the Temple of the Birth-Giver of God in Kiev. 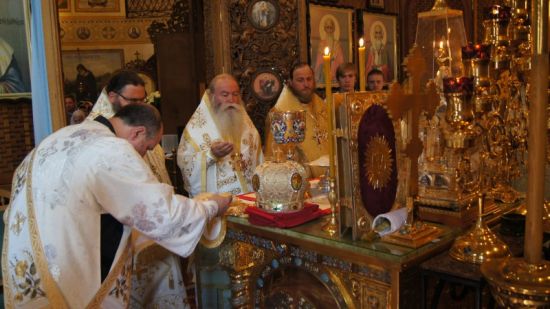 The Divine Liturgy was celebrated at the main church of the monastery by Metropolitan Gavriil of Loveč, head of the delegation, together with Metropolitan Ioann of Snepole, who accompanied a delegation led by Bishop Nikodim of Rovenki, a vicar of the Lugansk diocese; archimandrite Damian (Davydov), abbot of the monastery; the brethren and ordained guests.

Archimandrite Damian thanked Metropolitan Gavriil for common worship and asked for his prayers for the brethren of the monastery and parishioners.

Members of the delegation visited St. Demetrius’ church-sepulchre with the relics of St. Dimitra of Kiev, a native of Bulgaria, who built the first church of the monastery in the 19th century.

Most viewed articles
The Truth About Riches176
The Muskox Response To COVID-19131
Metropolitan Onuphry Speaks on How to Protect One’s Soul From Sin101
Patriarch Porfirije Thanks the Russian Church for Participation in Restoring Serbian Churches95
Do We Act Differently Than Others?59
March for Life participants optimistic for a post-Roe America: ‘This is just the beginning’53
Most millennials, Gen Z adults support bans on abortions when baby’s heartbeat is detected: poll48
Strong Orthodox Presence at the 2022 March for Life45
Sunday of the Samaritan Woman1
Most popular authors
Pravmir.com team289
Fr. Gabriel Bilas176
Archpriest Michael Gillis131
Priest Luke A. Veronis58
Ryan Foley53
Maria Trushanina1