On November 20-22, 2013, Vienna hosted the IX Assembly of the World Conference of Religions for Peace held on the theme ‘Welcoming the Other: Action for Human Dignity, Citizenship and Shared Well-being.’ Taking part in the Conference were over six hundred followers of Christianity, Islam, Judaism, Hinduism, Buddhism, and other religions. In their deliberations they focused on inter-religious dialogue and mutual respect, protection of children and women from violence and hunger, development of the experience of peaceful coexistence of different religious communities and the settlement of conflicts. 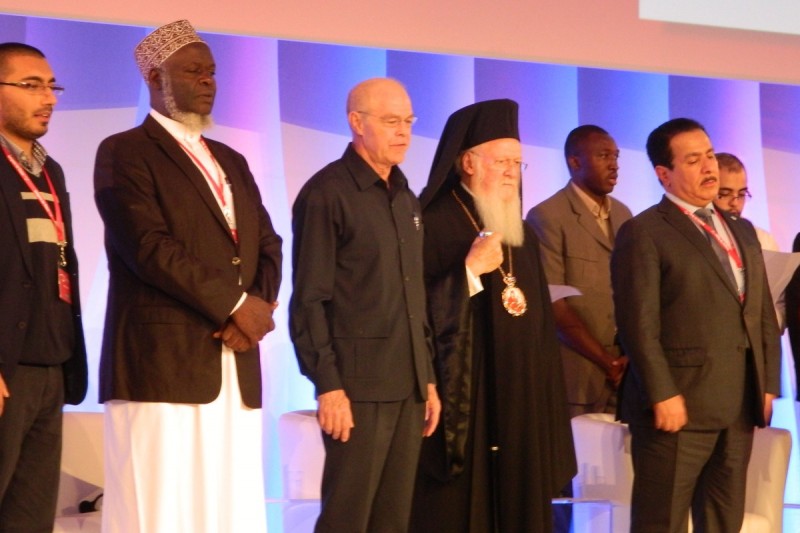 A delegation of the Russian Orthodox Church took part in the Assembly with the blessing of His Holiness Patriarch Kirill of Moscow and All Russia. The delegation consisted of archimandrite Philaret (Bulekov), vice-chairman of the Department for External Church Relations (DECR) – head of the delegation; Rev. Roman Bogdasarov, acting vice-chairman of the Department for Church-Society Relations and head of the secretariat of the Interreligious Council of Russia; and Rev. Dimitry Safonov, head of the DECR sector of interreligious contacts.

At the opening of the Assembly on November 20, there were read out greetings from the UN Secretary General Ban Ki-moon and from Pope Francis. Archimandrite Philaret read out greetings from Metropolitan Hilarion of Volokolamsk, the DECR chairman, who reminded the participants of the increase of persecution and discrimination against Christians in different regions of the world: ‘Every year, about one hundred thousand Christians die by violence for their faith because of intereligious conflicts. It is necessary to acknowledge the fact that Christians are the most persecuted religious community on our planet.’

On November 21, the Assembly began its work with the minute of silence for  Metropolitan Gregorios Yohanna Ibrahim of Aleppo and Metropolitan Paul Yazigi abducted in Syria on April 22, 2013. Archpriest Samuel Gümüs, a special representative of Patriarch Mar Ignatius Zakka I Iwas of the Syriac Orthodox Church, asked the participants to do anything possible for their soonest release. That same day a special session was held together with the UN Refugee Agency. A declaration ‘Welcoming the Other: Statement of Religious Leaders’ was adopted.

At the closing session on November 22, His Holiness Patriarch Bartholomew of Constantinople addressed the Assembly. The Vienna Declaration was adopted on behalf of the Assembly with major topics: overcoming of hatred of representatives of religious communities to one another; appeal to the establishment of peace in the areas of civil confrontation, and openness to interreligious dialogue.

Most viewed articles
The Authenticity of the Vision of Christ in the Life of Saint Silouan120
Epistle of the Council of Bishops of the Russian Orthodox Church Outside of Russia103
Living with Cunning People78
“A New Creation” Through the Cross of the New Adam66
The work of the Church in society is quiet, but full of hope and love, says the Director of Lumina Publications35
Most popular authors
Archimandrite Zacharias Zacharou120
Pravmir.com team103
Fr. Andreas Agathokleous78
Priest Philip LeMasters66
Ștefana Totorcea35