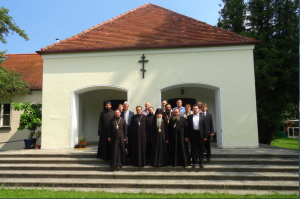 On July 10, 2013, the delegation of the Russian Orthodox Church led by Archimandrite Philart (Bulekov), vice-chairman of the Moscow Patriarchate’s department for external church relations and co-chairman of the Churches in Europe working group, visited the St. Job of Pochayev Monastery in Munich (German diocese of the Russian Church Outside Russia).

Fr. Philemon (Belyaev) took the delegation on a tour of the monastery and introduced them to its history and the particularities of its liturgical statute.

Then the members of the Churches in Europe working group were warmly greeted by Archbishop Mark of Berlin and Germany, who wished them God’s help in developing dialogue between the Russian and German public.

The delegation was accompanied by Dr. Johannes Eldemann, director of the Johann Adam Mӧhler Institute for Ecumenism, and Ms. Marita Müller, leader of the St. Petersburg Dialogue projects.