Delegations of Eastern Orthodox Churches arriving in Moscow for 1,025 years since baptizing of Kievan Rus 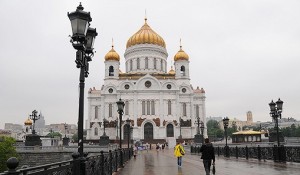 Cathedral of Christ the Saviour (Photo: Voice of Russia)

Delegations of the Eastern Orthodox Churches of Jerusalem, Antioch, Romania, and Cyprus arrive in Moscow later Monday to take part in the festivities marking the 1,025 years since the adoption of Eastern Orthodox Christian faith by Kievan Rus.

The Jerusalem and Cyprian delegations are led by the supreme hierarchs of these Churches – Patriarch Theophilos III and Archbishop Chrysostom, Moscow Patriarchate’s department for external church relations said.

According to the department spokesman, the Reverend Igor Yakimchuk, the top-rank clerics and the accompanying delegations will take part in the festivities that will be held from July 24 through to July 29 in Russia, Ukraine and Belarus at the level of both governments of the three countries and the Church.

The delegations of the Romanian Orthodox Church and the supreme hierarch of the Autocephalous Orthodox Church in America, Metropolitan Tikhon, who arrived in Moscow Sunday, are expected to have meetings with the Patriarch of Moscow and all Russia Kirill I Monday.

Delegations of all the fifteen national Orthodox Churches will take part in the jubilee festivities and eight delegations will be led by the ruling hierarchs of the respective Churches.

Festive liturgies and sermons will be held in Moscow July 24, in Kiev July 27/28 and in Minsk July 29.

Patriarch Irinej of Serbia and the Metropolitan of all America and Canada Tikhon have already arrived in Moscow. July 23, the organizers of the festivities expect the arrival Patriarch Theodore of Alexandria, Patriarch Elijah II of Georgia, Patriarch Neophyte I of Bulgaria, and the supreme hierarch of the Eastern Orthodox Church of Poland, Archbishop of Warsaw and all Poland Sabbas.

On the same day, Moscow Patriarchate expects the arrival of delegations of the Constantinople, Greek, Albanian, Czech, and Slovak Churches.

A specially charted train will take the guests first to Ukraine and then to Belarus. Placed in a specially equipped coach will be the highly venerated Christian relic – the Cross on which the St Apostle Andrew, the enlightener of Greece and Asia Minor was crucified.

The relic left the cathedral of Patras, Greece, for the first time ever. Since the moment of its arrival in St Petersburg July 11, more than 300,000 believers have made pilgrimages to venerate it.

The Cross is staying in Moscow’s Cathedral of the Savior through to July 25, after which it will be taken to Kiev /July 26 to July/ and then to Minsk /July 29 to August 2/.