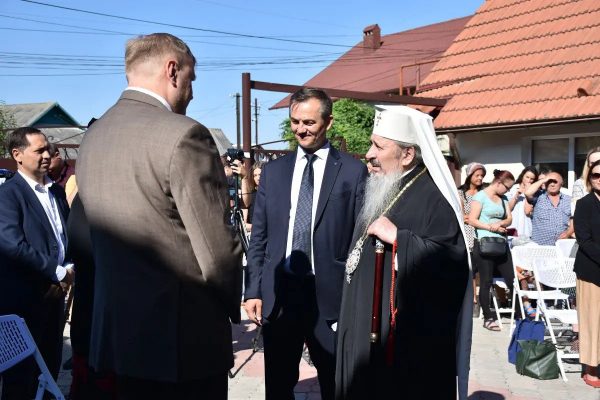 The Diaconia Social Mission of the Metropolis of Bessarabia on Thursday opened a multifunctional centre for children and families in Chișinău, which will provide support to families facing crises – both among refugees and socially vulnerable families in the Republic of Moldova.

The Metropolitan of Bessarabia, the representative of the Social-Philanthropic Sector of the Romanian Patriarchate, members of the diplomatic representations accredited in Chișinău and external partners of Diaconia Social Mission participated in the event.

The opening ceremony started with a blessing service officiated by His Eminence Metropolitan Petru together with priests from Chișinău.

“We are happy and thank all those who contributed to this work,” Metropolitan Petru said. “We thank everyone for this gift because it is a divine gift, a gift for all people, for children, for young people, for the poor.”

“This is our duty as Christians because God wants love from us. God loves us too, and that is why we must love those who do not know us,” His Eminence Metropolitan Petru added.

The Metropolitan of Bessarabia presented awards to those involved in setting up the centre and supporting the Diaconia Social Mission.

Father Ciprian Ioniță, President of the Filantropia Federation of the Romanian Patriarchate, received the Cross of the Metropolis of Bessarabia.

The representatives of Caritas Austria and Caritas Ambrosiana, Raphael Thurn and Sergio Malacrida, were also awarded the Order of St. Stephen the Great, 2nd degree. Igor Belei, Executive Director of the Diaconia Social Mission, spoke about social assistance in the conditions of the conflict in Ukraine and about Christian love, July 14, 2022. Photo: diaconia.md

Igor Belei thanked the Catholic philanthropic organization Caritas Europa, with which Diaconia Social Mission has been in partnership for two decades and was one of the partners in the establishment of “St. Anne” Centre.

“There are probably few examples in Europe where the structures of the two churches – Orthodox and Roman Catholic – sustain such a long-lasting and generative dialogue in finding answers to the needs of the neighbour,” Igor Belei noted.

This relationship “is yet another proof that Christian Europe shares the concern for its citizens, starting from the foundation that the Church has provided – Christian love of one’s neighbour,” the Director of Diaconia Social Mission underlined.

Bridges between communities through an integrative approach

In his speech, Msgr. Michael Landau referred to the particularity of “St Anne” Centre.

“A remarkable aspect of this project is its integrative approach. It will not only deliver help to the Ukrainian refugees, but it will also keep the needs of the local population in Moldova in sight. The centre will provide educational services for both refugee children and children from the host community. This will build bridges between the communities.”

“And the Food Bank will provide food and non-food items to Ukrainian refugees and the most vulnerable within the Moldovan society.”

“In this sense, St Anne Centre is already following a long-term vision to strengthen the integrative forces within the society,” Msgr. Michael Landau added.

“St. Anne” Multifunctional Child and Family Centre was opened with the financial support of Caritas Austria and Nachbar in Not.